The grant will be used to encourage 60 students to pursue and complete degrees in math and biology. 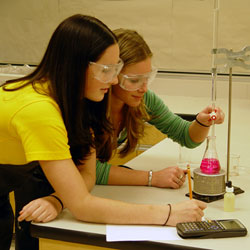 NSF has approved six STEM proposals from Texas Tech faculty for about $12.87 million in total funding.

A group of researchers at Texas Tech recently received a $1.45 million grant from the National Science Foundation to encourage 60 students to pursue and complete degrees in math and biology.

The Proactive Recruitment in Introductory Science and Math (PRISM) is a 5-year grant, said Brock Williams, lead investigator on the project and an associate professor in the Department of Mathematics & Statistics. Of the three grants recommended, Texas Tech received the largest amount in funding.

The PRISM team includes nine research mentors from the Department of Mathematics & Statistics, three from the Department of Biological Sciences and two from The Institute of Environmental and Human Health. Lawrence Schovanec, dean of the College of Arts and Sciences, and Vice President Juan Munoz also are included as senior personnel.

Beginning in the summer of 2011, 12 Texas Tech freshmen, 12 sophomores, and six high school students will spend three weeks at a summer research camp doing math and biology research with pairs of Texas Tech math/biology faculty. Several upperclassmen and graduate students will serve as mentors for the freshmen and sophomores.

"By plugging students into research early in their careers, we believe we'll keep more talented students in the math and biology pipelines, which will help broaden the pool for programs such as our Noyce scholarship program for future math/science teachers," Williams said. "We're anticipating several middle school teachers from a Greater Texas Foundation-funded program will also be on campus during the summer to participate in math and science research, so I expect there will be many opportunities for the two groups to work together."

The Texas Tech students will continue working with their research mentor through the next year. Each student will receive a $3,000 stipend during the academic year and a $1,200 stipend (plus food and housing) for the summer camp. The sophomores then will present their research at a national research meeting.

In recent years, the NSF has approved six STEM proposals from Texas Tech faculty for about $12.87 million in total funding, Schovanec said.

"STEM has become a major priority for Texas Tech because it's a major national issue," Schovanec said. "That's why the NSF funds programs such as this, and why the state of Texas emphasized STEM initiatives as part of the Closing the Gaps initiative. To be competitive in today's technological society, we, as a state and a nation, must be strong in science and math. There's evidence to support we've been losing our competitive edge in these fields, and there's a lack of people studying math and science. So, we're trying to address those problems."

Along with NSF-funded STEM initiatives, the university also has additional programs funded by other agencies, such as $2 million in grants from the National Institutes of Health programs in physics and environmental sciences, and $3 million from the Greater Texas Foundation to fund teacher preparation in math and science.

"We are very excited about plugging this program into our existing STEM infrastructure," Williams said. "One of our existing grants supports Texas Tech faculty to offer online tutoring and/or course materials to high schools. This will help the PRISM project enormously in identifying and recruiting talented students. Our South Plains Math Scholars scholarship program for underprivileged math majors also will be a prime source of recruits for this program."