Biomarkers for contamination are highest in animals near Galapagos Island’s marine reserve. 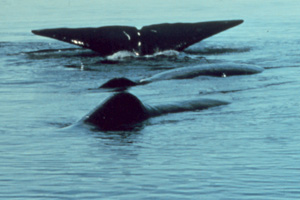 Researchers did not expect the Galapagos to be the area they would find more of the biomarker, since it is usually considered a pristine area. Photo courtesy of NOAA.

A Texas Tech whale researcher said she and others found evidence of exposure to polycyclic aromatic hydrocarbons (PAHs) and persistent organic pollutants, including the pesticide DDT, in Pacific Ocean-dwelling sperm whales.

But even more surprisingly, the whales living in or around waters near the Galapagos Islands – a UNESCO marine reserve and considered pristine – showed higher levels of a contamination biomarker than whales from other areas of the world's largest ocean, said Celine Godard-Codding, an assistant professor at The Institute of Environmental and Human Health at Texas Tech and a lead investigator on the project.

The study published online Dec. 6, ahead of print in the peer-reviewed journal Environmental Health Perspectives (EHP). Read the study.

"Our findings provide a unique baseline for global assessment of pollution exposures and sensitivity in the sperm whale, a globally distributed and threatened species," Godard-Codding said. "What was surprising was the higher level of the biomarker found in whales near the Galapagos Islands. We would not have expected the Galapagos to be the area where we'd find more, since it's usually considered such a pristine area."

The broad study provides a baseline for future research on ocean pollution and health, she said. Tissues from some of the whales from all five Pacific regions also were analyzed for DDT, the fungicide hexachlorobenzene, PAHs, and 30 types of polychlorinated biphenyls (PCBs), known to cause endocrine disruption and neurotoxicity.

From 1999 to 2001, the study authors biopsied skin and blubber from 234 male and female sperm whales in five locations across the Pacific Ocean, which included the Gulf of California, Mexico; the Galapagos Islands, Ecuador; Pacific waters between the Galapagos Islands and Kiribati (Pacific Crossing); Kiribati; and Papua New Guinea.

Tissue samples from the whales were analyzed for expression of CYP1A1, an enzyme that metabolizes certain aromatic hydrocarbons—the more CYP1A1 is expressed, the more likely the animal has been exposed to compounds such as those examined in this study.

"Nothing of this scope has been done for an ocean-wide level," Godard-Codding said. "That's the exciting thing about this study. And that we could detect regional differences in the biomarker."

What it all Means

The biomarker does not prove the animals came in contact with manmade contamination or industrial waste, she said. It reveals exposure to a compound whether it's manmade, such as industrial combustion, or naturally produced, such as a volcano or forest fire. However, the enzyme does show the animals are coming in contact with compounds known to induce molecular changes.

Pollutants were found in all the samples, but levels of the pollutants measured did not correlate directly with levels of CYP1A1 expression. However, the authors were unable to test for many types of pollutants because the small amounts of tissue allowed under standards for humane biopsying of marine mammals precluded extensive chemical analyses.

Godard-Codding said that sperm whales are important sentinels of ocean health. These carnivores are likely to bioaccumulate and biomagnify fat-soluble pollutants because they are massive and long-lived. They can weigh up to 50 tons and live up to 70 years. Monitoring of sperm whales may also provide information on specific regions of the Pacific because females and juveniles tend to stay within a 600-mile range, she said.

Godard-Codding said that additional study is needed to further characterize the relationship between CYP1A1 expression and pollutant burden in sperm whales and other cetaceans, as well as exposures to industrial and natural sources of PAHs.