30 years after Beatles legend, John Lennon, was killed, Texas Tech professors remember in their own ways. 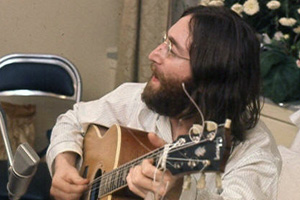 Today marks the 30-year anniversary of the day Beatles legend, John Lennon, was shot and killed outside his New York City apartment.

Today marks the 30-year anniversary of the day Beatles legend, John Lennon, was shot and killed outside his New York City apartment.

Texas Tech Assistant Professor Mark Morton, who is teaching the first Music of the Beatles course this semester, said he was a music student at The Juilliard School in New York at the time of the assassination.

"I was, and still am, a Beatles fan, and I had hoped to see John Lennon that day," he said.

The Juilliard School is only six blocks from 72nd Street, where Lennon's building was located.

"I was probably standing on the sidewalk right next to his assassin," he said. "I know I had a conversation with the photographer that took the famous photo of Lennon signing his assassin's album."

He said he will commemorate the anniversary in his class by sharing stories, photos and authentic New York newspapers from the days following Lennon's death.

"Perhaps we will have a sing along of "Imagine" to finish the class," he said.

The Music of the Beatles course is open to music and non-music majors.

John Lennon rose to fame in the 1960s as a singer/songwriter alongside Paul McCartney and the other Beatles members.

Rob Weiner, associate librarian and pop culture guru, described John Lennon as one of the greatest songwriters of the 20th century.

"You cannot discuss the history of the 1960s without talking about the Beatles. They changed the world in the same way wars, politics, technology do," he said. "Even today's techno-savvy youth are interested in the work of Lennon and the Beatles."

Fans of all ages celebrated with Twitter and Facebook posts when the Beatles finally became available on iTunes last month, proving that Lennon helped create timeless works of art that are still popular today.

Christopher Smith, associate professor and chair of musicology, said Lennon's honesty, courage and creativity allowed him to remain influential throughout the years.

"Thirty years after his untimely death, John Lennon's contribution to music, popular culture, and public consciousness in the 1960s and '70s seems even greater--and even more prescient," he said.