The King of Pop's timeless music lives on in a new generation of fans. 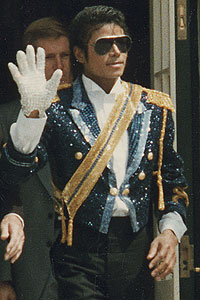 Michael Jackson left a lasting impact on pop music and generations to come.

It's close to midnight, something evil's lurkin' in the dark. Under the moonlight, you see a sight that almost stops your heart. You try to scream, but terror takes the sound before you make it. You start to freeze, as horror looks you right between the eyes. You're paralyzed… 'cause this is Thriller!

The world first heard those lyrics 28 years ago, when the late Michael Jackson released his album, Thriller, on Nov. 30, 1982. Today, that record remains the best-selling album of all time, and Texas Tech pop culture guru, Robert Weiner, said it is for good reason.

"Michael Jackson has well-constructed songs that are memorable even today. Jackson's songwriting is top-notch," Weiner said. "The production by Quincy Jones also contributes to a good sounding record. And in 1982, nobody had done a record like Thriller, where nearly every song was a winner."

Seven of the album's nine songs were released as singles, and all reached the top 10 on the Billboard Hot 100. Thriller won a record-breaking seven Grammy Awards at the 1984 Grammys.

Another reason for Thriller's success, according to Weiner, is the video which was unprecedented at the time.

"Thriller was one of the first major successful selling albums where the video played a pivotal role in selling the record. Jackson's dance moves are still being used today."

The Thriller video was deemed "culturally significant" and therefore preserved by the Library of Congress to the National Recording Registry.

"Lighting an Era" Through the Eyes of a Student