As nanotechnology becomes one of the next scientific frontiers, very little is known about how nanoparticles will react in the environment. 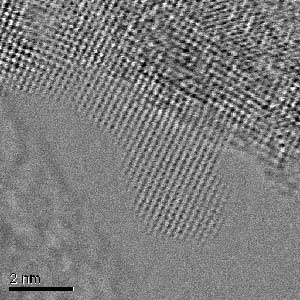 After studying how different sizes of titanium dioxide particles (seen above) adsorb strontium from water, Ridley said particle size results in subtle differences in the interaction between the nanoparticle and strontium.

When it comes to the size of nanoparticles moving contaminants in water, the jury's still out.

That's what Moira Ridley, a professor in Texas Tech's Department of Geosciences, found out with several experiments involving strontium and nanoparticles of titanium dioxide – one of the most widely produced nanoparticles used in everything from cosmetics and sunscreen to automotive paint.

She presented her findings during the annual meeting of the Geological Society of America.

As nanotechnology becomes one of the next scientific frontiers, very little is known about how nanoparticles will react in the environment, Ridley said. Many scientists worry that nanoparticles could carry more contaminants per gram than larger particles because, though smaller, the nanoparticles have more surface area onto which contaminants can bind and, therefore be dispersed through, say, an aquifer or a stream.

However, after studying how different sizes of titanium dioxide particles adsorb strontium from water, she said particle size results in subtle differences in the interaction between the nanoparticle and strontium.

"The general view is that because nanoparticles have large surface area, they should be able to absorb more contaminants relative to their size per gram, than a larger particle," she said. "But what we've found is that the effects of nanoparticle size on transporting potential contaminants are much more subtle."

Through a $366,000 grant from the National Science Foundation, Ridley studied titanium dioxide behavior with strontium because both are environmentally relevant and the behavior of large titanium dioxide particles is well understood.

"The key question is 'do smaller particles transport potential contaminant particles more readily,'" she said. "We've found that it depends. We do see differences, but no specific trends, as yet. It does depend on the size of the nanoparticle, but it's also dependent on the material. Not all nanoparticles are going to behave in the same way. Essentially, this is why we need this type of research."