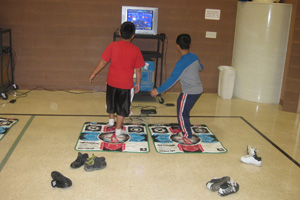 For years, the nation's leading researchers have looked at ways to fight childhood obesity and spread awareness – a difficult task in a society that lives on hamburgers, fries and drive-thru ordering.

One Texas Tech researcher wants to save future generations from becoming part of a growing trend. Zan Gao, assistant professor in the Department of Health, Exercise, and Sports Sciences (HESS), thinks video games are the answer.

"We worked with children for two years using interactive games," Gao said, "and we noticed that the kids really loved that because they have interest in playing video games and using their bodies. I think it's a very effective intervention with school children."

Gao has found a way to include forms of "extainment," the combination of exercise and entertainment, into schools' physical activity programs. He uses fitness video games like Wii Fit, Wii Sport and Dance Dance Revolution (DDR) to encourage children to incorporate fun with fitness.

From Beijing to Lubbock

Gao, a graduate of Beijing Sport University and former reporter for Chinese Sports Daily, developed his interest in childhood obesity research while earning a doctorate in kinesiology at Louisiana State University.

Under the direction of his graduate advisor, Gao researched and worked on several projects addressing diversity issues in sports and physical activity. He first noticed the magnitude of the childhood obesity epidemic while working as a volunteer instructor for a local youth physical activity program in Baton Rouge, La.

He said this was when he developed a passion for helping children overcome obesity – a problem he specifically noticed among African-American children from low-income families.

Gao moved to Salt Lake City in 2007 where he was an assistant professor of exercise and sports science at the University of Utah. There, he began working with elementary children through school-based physical activity interventions.

Gao said the high population of Latino children in Salt Lake City sparked his interest in helping minorities – particularly since it's a demographic prone to obesity.

Since then, Gao has been published in 20 peer-reviewed journals and has received several national awards and honors. He also was invited to give a presentation titled "Integrating Dance Dance Revolution to Promote Urban Latino School Children's Physical Health and Academic Achievement" at the second Robert Wood Johnson Foundation Salud America! annual summit in San Antonio.

Gao's success at the University of Utah was not enough to keep him. During his interviews at Texas Tech, he was informed of the high percentage of Latinos in West Texas. His interest in developing school-based intervention programs for this particular demographic ultimately drew him to Lubbock.

"My ultimate goal is to build an interactive fitness gym in certain schools," Gao said. "I would like to put a dance system in a school gym."

Talks also are underway for Gao to potentially collaborate with professors from the Texas Tech Health Sciences Center and College of Agricultural Sciences and Natural Resources to add nutrition into intervention programs.

"Interactive video games can be part of a physical education class, but not all of it," Gao said. "Kids need to learn other things like jumping, kicking and running."

So whether they are competing in a cyber-tennis match or playing a pick-up game of basketball, Gao said he plans to continue to help overweight children find ways to stay physically active.

"I love kids and I want to help them to be fit," Gao said. "I want to do something to make a difference in their lives and to help them to develop and to maintain a physically active lifestyle."