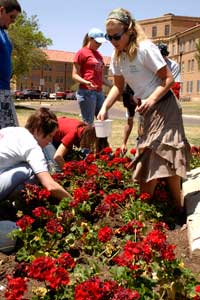 In a push to become more green, the Texas Tech campus has implemented programs like Arbor Day to help the push become a reality.

Texas Tech was recognized by the Professional Grounds Management Society (PGMS) with a merit award for its annual Arbor Day event in the society's 2010 Green Star competition. The award was part of the society's University and College Grounds category for exceptional grounds maintenance.

Gene Gibson, managing director of grounds maintenance at Texas Tech, said the award reflects the hard work of his employees, and also the university's goal to maintain its campus' appearance.

"This is a great honor to receive," Gibson said. "It not only recognizes the efforts put in by our staff, but also Texas Tech University's commitment toward enriching its students', staff and visitors' lives through green spaces."

PGMS is an individual membership society of grounds professionals dedicated to advancing the grounds management profession. Its Green Star Awards program brings national recognition to grounds maintained with a high degree of excellence.