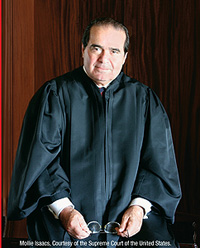 Photo Credit: Mollie Isaacs, Courtesy of the Supreme Court of the United States.

In its continued efforts to enhance student development, the Texas Tech School of Law's Sandra Day O'Connor Distinguished Lecture Series will feature a joint presentation by United States Supreme Court Justices Antonin Scalia and Stephen Breyer. The public presentation will be held at 5 p.m. Nov. 12 at the Lubbock Memorial Civic Center and is open to the public.

Antonin Scalia, the most senior associate justice of the nation's high court, is making a return trip to Lubbock as he drew a crowd of nearly 5,000 in 2008 in the second year of the lecture series. A first-time speaker in the series, Stephen Breyer took his seat as associate justice on the Supreme Court in August 1994 after being nominated by President Bill Clinton. 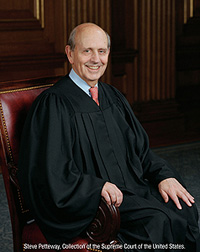 Photo Credit: Steve Petteway, Collection of the Supreme Court of the United States. This photograph may not be published for any advertising (aside from the stated use) or commercial endorsements purposes, or in any way convey a false impression of Supreme Court sponsorship or approval.

"Texas Tech University School of Law and the larger community look forward to the presentation by two brilliant jurists and public servants," said Susan Saab Fortney, Texas Tech School of Law Interim Dean and Paul Whitfield Horn Professor. "We are deeply honored to host not only one Supreme Court justice, but two. Our law students and other audience members will learn a great deal from hearing the justices' perspectives on constitutional interpretation."

The lecture series began in 2007 and was made possible by Houston-based attorney and 1984 Tech Law alumnus Mark Lanier, who founded the Lanier Law Firm with offices in Houston, New York, Los Angeles and Palo Alto, Calif. Lanier, whom underwrites the series, is also the benefactor of the Mark & Becky Lanier Professional Development Center addition to the School of Law, which opened its doors in April 2008.

Admission is by ticket only. Complimentary tickets are available at the law school, by calling (806) 742-3787, ext. 248 or by emailing specialevents.law@ttu.edu.