This is the sixth consecutive win for the undefeated team. 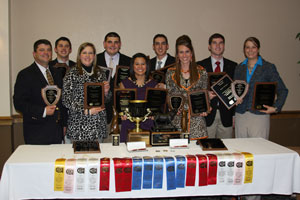 More than 130 points separated the Texas Tech meat judging team from other teams.

More than 130 points separated the 2010 Texas Tech Meat Judging Team from its nearest competitor, as the team posted a score of 4,233 points and won every division except beef grading.

"The team was extremely consistent in placing classes and excelled in reasons," said Mark Miller, the meat judging team coach and Texas Tech's San Antonio Livestock Show Distinguished Chair in Meat Science. "We must maintain our focus and strive for excellence as we prepare for the international competition."

In terms of individual achievement, team members took the first, second and third high individual spots. High individual KatieRose McCullough, a junior from Castle Rock, Colo., earned a score of 1,083 points – the highest score ever posted by a Red Raider in national competition.

Loni Woolley, a junior from Grandview, was second high individual with a score of 1,068. She was followed closely by teammate Trevor White, a junior from New Home, who scored 1,063 points.

Separately, the team had two of the top-ten individuals in the alternate division. Reeves and Holmes finished ninth and tenth overall, respectively.

This win follows five consecutive wins for the undefeated team. The Red Raiders will compete at the international competition on Nov. 14 in Dakota City, Neb., for the national championship title.