Kicking For A Goal

Alpha Tau Omega is hosting a world cup in hopes to donate soccer balls to those in Iraq. 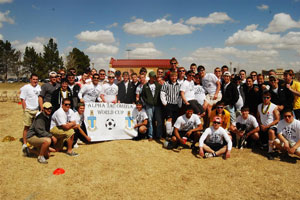 In March, the Texas Tech ATO chapter hosted its first World Cup philanthropy event to raise money and collect soccer balls in honor of the Kick for Nick Foundation – an organization which collects the balls and distributes them to children in Iraq.

Now, hundreds of those children are able to play soccer thanks to a donation of 250 soccer balls and $1,000 they recently received from the fraternity.

"Rarely do you ever see the outcome of your contributions when you donate to a majority of non-profit organizations," said Roshan Sharma, World Cup organizer. "Once I saw the children surrounded by soccer balls and holding a piece of paper saying that a Greek organization had donated money to make this happen, it really made me feel like my hard work made a difference."

The Story behind the Soccer Balls

Sharma said he first heard about the Kick for Nick foundation on ESPN – he was inspired by the cause and began looking for ways to bring the event to Texas Tech.

"I have played soccer my entire life and love the game, so once I saw the story on ESPN, I started to ask myself 'how could I help contribute?'" Sharma said. "The World Cup was happening that summer, and something just clicked –that's when I came up with the idea for a philanthropic event that my fraternity could host to help benefit the Kick for Nick Foundation."

Private First Class Nick Madaras is the inspiration for the event. While on patrol in Iraq, Madaras, who played soccer his entire life, noticed how talented the children were at soccer, yet he also noticed they often had to play the game without an actual soccer ball.

While home on leave in July 2006, Madaras collected as many balls as he could to take back to the children near his post, but he never had the opportunity to distribute the balls – 19-year-old Madaras was killed by a roadside bomb on Sept. 3, 2006.

The Kick for Nick foundation began when Ken Dartley, of Wilton, Conn., inspired by Madaras' story, contacted Shalini and Bill Madaras about starting a program to collect soccer balls and distribute them to the children in Iraq – all in Madaras' honor. Since then, people and organizations from across the country have participated in the event.

All of the soccer balls the Kick for Nick organization delivers overseas have "PFC Nick Madaras" written on them so that he may be remembered.

The Future of the "World Cup" 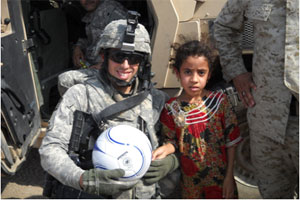 Private First Class Nick Madaras was unable to hand deliver the soccer balls he collected in 2006, but his legacy lives on with Kick for Nick.

Since ATO hosted its first World Cup, Sharma has remained in contact with Madaras' father, Bill Madaras, who recently sent Sharma the photograph of the Iraqi children holding the soccer balls they received from Texas Tech.

Each box sent from Texas Tech also contained an acknowledgement recognizing the six sororities who participated in the local event.

"Being able to talk with Bill Madaras and have his support behind us has really been helpful," Sharma said. "He has expressed to me on numerous occasions how much this means to him and his family. I cannot imagine what he and his family are going through, and the fact that they are trying to help fulfill their son's dream is truly remarkable."

Sharma said plans are underway for the second annual event this spring – he hopes to top last year's numbers.

"At the end of the day, I just want everyone to have a good time and take a second to not only remember Private First Class Nick Madaras, but also all of the other men and women who have lost their lives fighting for us," Sharma said.

A Salute to the Red, White and Blue