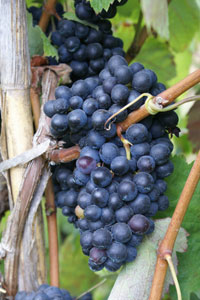 Researchers are attempting to match grape varieties to the local climate.

Wine grapes that flourish in certain parts of Europe just might excel in West Texas. Or at least that's what researchers at Texas Tech are hoping to find out.

Researchers in Texas Tech's Department of Plant and Soil Science are evaluating wine grape varieties from Spain, Portugal and southern regions of Italy and France that are growing at a research vineyard near the Lubbock airport.

"The concept is to try to match grape varieties to the local climate, so we are evaluating varieties that should do well in our hot climate, but mostly have been untested here," said Ed Hellman, professor of viticulture. "I say mostly untested because some of our growers on the High Plains, based on our suggestions, have been moving in this direction already.

Hellman said the hope is to grow grape varieties on the South Plains that can make exceptional wines, which would make the grapes in high demand in other parts of the state. Winemakers throughout Texas commonly purchase grapes from the South Plains where they can obtain large quantities of high-quality fruit to produce many different wine types.

Research on grape variety evaluation is long-term, but the young vines produced their first crop in 2010 so preliminary results should be available in December.

Listed are the regions in Europe where these varieties have traditionally been grown and perform well:

A New Voice for Texas Tech