Assistant Professor Jamie Cooper said weight gain that occurs during the holidays may lead to a much bigger problem than any New Year's Resolution can fix. 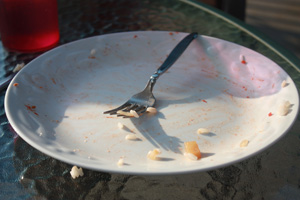 Turkey and dressing, pecan pie and eggnog are just a few of the holiday favorites that we look forward to all year. November and December are filled with elaborate meals, treats at the office and cookies galore that most of us simply can't resist. Unfortunately, according to Jamie Cooper, assistant professor in the Texas Tech Department of Nutrition, the resulting weight gain that occurs during the holidays may lead to a much bigger problem than any New Year's Resolution can fix.

In 2009, Cooper conducted a study assessing the changes in body weight, body fat percentage and blood pressure that occurred during the holiday season. Around 150 participants underwent baseline testing of these factors a week before Thanksgiving. Then, the same measurements were taken the first week of January.

Although Cooper said changes ranged from a loss of five pounds to an increase of 13 pounds, the study showed the average increase over the 8-week holiday period was about 1.5 pounds.

"The study's results might be surprising to people because one or two pounds doesn't seem like much," Cooper said. "But the average yearly weight gain in adults in the United States is just over two pounds. So when we are seeing that a person gains 1.5 pounds during the holidays, that's a pretty significant amount."

"The idea is you gradually become obese over time, over decades," she said. "If you are 20-years-old and you gain the average yearly weight gain, 10 years later you will be 20 pounds heavier."

According to the study results, if the average person gains two pound per year, 75 percent of that yearly weight gain could be acquired over the holidays.

"So we're thinking if we can target the holiday season and try to prevent weight gain during that period, it may be a way to combat obesity over time or prevent individuals from gaining weight on a yearly basis," Cooper said. 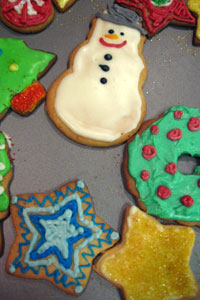 Although there is usually a lot of snacking associated with the holiday season, Cooper said it is important to stick to your normal eating patterns as much as possible.

Although she said there are many factors that contribute to holiday weight gain, Cooper recommends a few easy tips in order to avoid it this year.

For those who exercise regularly, Cooper recommended maintaining the same level of activity throughout the holidays. For those who don't, she suggested beginning an exercise regimen to avoid gaining weight.

"Try to get some increased activity so you're burning the same amount of calories or maybe a little bit more than normal," she said.

Although there is usually a lot of snacking associated with the holiday season, Cooper said it is important to stick to your normal eating patterns as much as possible.

"Just because somebody brings in some goodies to work doesn't mean you necessarily have to eat them," Cooper advised. "If you don't usually snack in the afternoon, then don't do it during the holiday season either."

While some may attempt to avoid weight gain by eating little to nothing before their big holiday meal, Cooper said this technique will only lead to overeating.

Vegetables, soups and salads are low-calorie options to eat prior to a big meal in order to feel fuller and eat less.

"Satiety signals, or fullness signals, in the body take a little bit of time to reach the brain and tell you that you're getting full," Cooper said.

"So if you eat really fast you tend to overeat. By eating slow, hopefully you can feel full before you've done too much damage."

"You don't necessarily have to cut things out," Cooper said, "but try to choose healthier options."

Although she said pecan pie is her favorite, by searching online, Cooper found that pumpkin pie is a lower calorie Thanksgiving option.

"So you don't have to be a nutritionist or a dietitian to know what foods might have less calories or less fat in them," she said. "You can look this up on your own ahead of time."

Avoiding holiday weight gain does not mean depriving yourself or adhering to a strict diet.

"You can have some dessert or stuffing, just try not to eat as much of it," Cooper said. "Or if you splurge one day, try not to snack on leftovers for days after."

Because holiday foods, especially desserts have such a high calorie content, portion control and smart choices will make the difference.

"Eating is really the place where you can have the most impact and should make the most emphasis on changes," Cooper said.

When it comes to food, she explained that you could exercise for an hour and still not burn as many calories as you ate.

"With exercise you burn about 100 calories per mile," she said. "The exercise can only take you so far, and then you just have to eat healthier."

The data collected in the holiday weight gain study is currently being written into a manuscript to be published, but Cooper has higher hopes for the data.

"What I'd like to do is a holiday intervention study," she said.

By presenting people with information on how to make healthy choices, Cooper said she hopes an intervention could help prevent holiday weight gain and, ultimately, annual weight gain as well.

"If people can try to eat a little bit healthier during the holidays, exercise a little bit more and be a little more diligent during that 8-week period, then in the long run it might really pay off in terms of obesity prevention," she said.

Kings and Queens Will be Making an Appearance