Though scientists have long known about conodonts, Nicole Peavey said only recently have scientists begun to understand these enigmatic and relatively successful creatures. 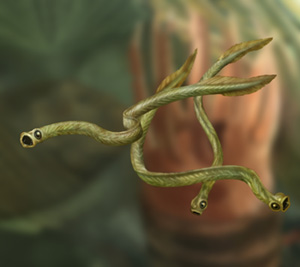 Perhaps if they were more than a few inches long, conodonts might have been something to worry about in the Silurian seas 440 million years ago. Illustration credit: Karen Carr Studios

They had rows of sharp, interlocking conical teeth that, while not affixed to a jaw like we know, would rake prey into their mouths kind of like the creature in the movie "Alien."

Though scientists have long known about conodonts from their fossilized teeth, Texas Tech graduate student Nicole Peavey said only recently have scientists begun to understand these enigmatic and relatively successful creatures.

She will discuss them and how recent findings may require new names for different species at a poster session at the annual meeting of the Geological Society of America in Denver.

"Conodonts are marginally related to fish, but not really fish like we think of them," Peavey said. "They're kind of like eels or hagfish or lampreys, but different. They may be close in shape and lifestyle, but it's not a perfect comparison. That's like comparing a modern mammal to a dinosaur. Conodonts went extinct at the end of the Triassic period, about the time dinosaurs were evolving. The group is gone, which makes them very mysterious. They don't have any living relatives to compare them to."

Perhaps if they were more than a few inches long, conodonts might have been something to worry about in the toothed-and-terrifying Silurian seas 440 million years ago. Kind of like prehistoric sharks, their soft bodies didn't leave much to make fossils, and only their unique teeth were left behind.

In the 1980s, paleontologists found full fossilized conodont specimens, and only recently have scientists begun to unravel their secrets, she said.

"They're really interesting animals," Peavey said. "No one knew what the animal looked like until fairly recently. They're a couple inches long, kind of skinny with a complicated set of teeth. Those teeth are what paleontologists find. Even before paleontologists knew what the animal looked like, they were important because their teeth served as geological markers for economic geology, such as finding oil, and for correlation, where geologists match rocks from one area with rocks for another area."

These animals lived everywhere from the shallows to the depths and probably specialized in eating certain types of plankton, she said. First appearing in the Cambrian seas about 500 million years ago with the first shelled fossils, they managed to outlast trilobites, sea scorpions and other successful animals of the time.

They probably liked little plankton, and different conodonts may have eaten different plankton, she said. From the teeth Peavey studies, they probably ate something that needed to be cut or squashed. But no one knows for sure.

Some believe the sharp teeth might have been hidden behind primitive gums until they would strike at their prey, she said. Teeth would break, but regenerate.

"Our knowledge of them is still pretty basic," she said. "We know they were around swimming in the ocean. Some looked like little eels, most have paired teeth at the head end. They lived in all kinds of environments. As far as what they ate, there are a lot of people who would like to know."

Researchers to Save More Than $250,000 For Odessa's Medical Center Hospital

Nicole Peavey, graduate student in the Department of Geosciences