Albert Sacco Jr. was selected from a pool of 56 applicants. 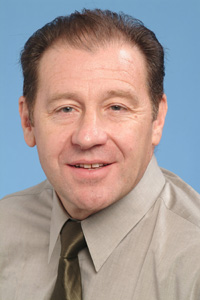 The announcement came from Provost Bob Smith, who said Sacco was one of 56 people to apply for the job.

"Dr. Sacco's background should be uniquely supportive of his new role and contributions at Texas Tech University," Smith said. "We will benefit enormously from his dedication, creativity, and extraordinary experiences, including service as a U.S. astronaut."

"We are so fortunate to welcome this outstanding leader as Texas Tech takes another step in its journey to Tier One," said Guy Bailey, president of Texas Tech. "Sacco is an outstanding teacher and researcher. His enthusiasm will further discovery within the Whitacre College of Engineering."

"I am thrilled to join the Texas Tech academic team of outstanding researchers and educators," Sacco said. "And I look forward to supporting the Whitacre College of Engineering's desire to become one of the nation's top-rated engineering colleges."

Sacco is currently the George A. Snell Distinguished Professor of Engineering and the director of the Center for Advanced Microgravity Materials Processing at Northeastern University. He flew as the payload specialist on the Space Shuttle Columbia on shuttle mission STS-73 in 1995. The 16-day mission aboard Columbia focused on materials science, biotechnology, combustion science and fluid mechanics contained within the pressurized Spacelab module.

Born in Boston, Mass., Sacco completed a bachelor's degree in chemical engineering from Northeastern University in Boston in 1973, and a doctorate in chemical engineering from the Massachusetts Institute of Technology in 1977. He then joined the faculty of the Worcester Polytechnic Institute, becoming a full professor and serving as the chair of the chemical engineering department from 1989 until 1997, when he joined the faculty at Northeastern. He has consulted for numerous companies in the fields of catalysis, solid/gas contacting, zeolite synthesis and applications, and equipment design for space applications.

Sacco has more than 192 publications (including book chapters) in the areas of carbon filament initiation and growth, transition metal and acid catalyst and their deactivation, and zeolite synthesis, and he has been the principal investigator on more than $24 million in research grants.

Using his space flight experience, Sacco has given more than 300 presentations to approximately 27,000 K-12 teachers and their students as a means to motivate students to consider careers in science and engineering. He is a fellow of the American Institute of Chemical Engineers and in 2004 was elected to the International Academy of Astronautics. Most recently, he was named the recipient of the 2010 New England Institute of Chemists Distinguished Chemist Award.