In 1936 Carroll McMath never thought his words on paper would one day be sung by all. 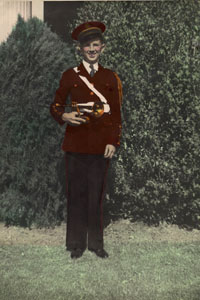 Carroll McMath played the cornet through his high school and college music career.

It was 1936 and Carroll McMath wrote words to a tune that would one day be sung at every sporting event and every spirit activity.

The History and McMath

It was a regular meeting for the chapter of Kappa Kappa Psi when ideas were discussed about creating a fight song for Texas Tech.

McMath and Jim Nevins went  to the hallway the same night as the meeting and wrote a song. The tune was inspired by a part of the "Three Days, Fantasia-Overture" by Adolf Lotter, but the words came from McMath and Nevins.

"My guess is back in the 1930s, old Ivy League schools had fight songs and funky words," said Bill McMath, one of Carroll's sons. "They were probably influenced by those songs."

The song was introduced to the chapter and to the band director. Bill said it was later played at a football game once the composition was transcribed for each instrument.

"The first time it was played the cheerleaders liked it, and when the first touchdown happened they asked the band to replay the song," Bill said. "It was not the official fight song at that point, but it started becoming a tradition."

Before McMath attended Texas Tech and created a song that would resonate through the school, Bob McMath, Carroll's eldest son, said Carroll used to play the cornet and probably first became interested in band while in high school.

"It was a big thing in the community to have a marching band," Bob said.

Once Carroll graduated from Texas Tech he began working in the music industry and became a band director at Denton High School.

"People in Denton thought very highly of him," Bob said. "He was a man of great faith and had lots of integrity."

Carroll's legacy not only lived on at Texas Tech, but Denton Independent School District also named a middle school after him.

Today elements of the fight song can be found all through campus, whether watching a TV commercial or attending a sporting event the words and tune to the song are always present.

Current drum major Michael Harrison said he is proud of where the fight song came from, and there is nothing better than being able to hear the fight song play in the middle of football season.

"We have the most student involvement with the fight song," said Harrison, a senior music education major from Austin. "When we traveled to UT their fight song was clean and spectacular, but the crowd does not get into it as much as Tech, and at A&M they are just whooping."

Harrison said the students at Texas Tech are clapping, jumping and getting their guns up.

Through the years the fight song has seen some changes. In the 40s and 70s the fight song was updated in tune to become a little faster and more appropriate for a marching band.

Since 1936 the fight song has resonated through the stadium and the words have become a symbol of Texas Tech.

"The fight song is exciting and meaningful," Harrison said. "The music, not just the words, represent Tech. It is the epitome of school pride." 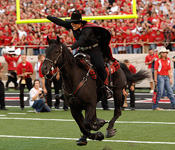 Grammy Nominee and Jazz Vocalist to Perform at Texas Tech