A Salute to the Red, White and Blue

Texas Tech honors veterans both on and off the field. 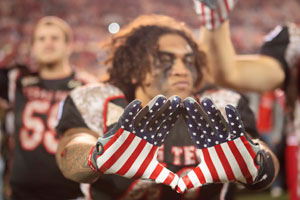 Soldiers were honored during the Missouri vs. Texas Tech game with new football gear.

For incoming freshmen, college is exciting and new. They are away from mom and dad for the first time and have a new sense of "freedom."

But for veterans who just finished serving our country, it can be different, frustrating and difficult. However, thanks to a newly developed program, things just might get a little easier.

The Military and Veterans Programs (MVP) came to life at Texas Tech in May 2010 and continues to grow with the help of retired Air Force Colonel Dave Lewis, Marine Corp Sergeant Michael Flores, and their staff. The program was developed to help the veterans at Texas Tech with any obstacle they face or to have someone who knows what they have been through.

"We are ensuring that if veterans need tutoring, need to see a counselor, need help filling out their paperwork for the G.I. Bill, or whatever the case may be, we are here for them," Flores said. "There is a core group of veterans here and on campus that make sure they are successful in college so they earn their degree."

Because of these efforts by the MVP office and previous efforts to help veterans, the G.I. Jobs Magazine named Texas Tech to its list of Military Friendly Schools for the second year in a row. Flores said the honor is great recognition for Texas Tech, but for the program, it is all about making sure veterans stay on track to get their education.

"We focus on recruiting, retention, receiving and re-entry back into the work society. I see the program growing huge," he said. "I think the potential is great here. Especially if we can accomplish not just being military friendly but that Texas Tech University is the university for veterans."

Army Sergeant Ernest Terrell and Marine Corp Sergeant Travis Hunter are two students that know too well the good times and the bad times of serving in the military, but in light of their experiences, they would do it all over again.

Both have been deployed to Iraq during their service, and are now utilizing their G.I. Bill in order to earn degrees and are involved with the MVP office.

Hunter, who did two tours in Iraq, said coming back to school after serving has been different but it was nice to get back in school to finish his political science degree.

"I still have friends that are in or just getting back from Afghanistan, and I still feel as if I should be there with them or I should be helping them out over in Afghanistan, Iraq or wherever they may be," Hunter said. "But, I knew this was the next step I needed to take in order to do what I needed to do."

"Working in the MVP office, for me personally, has gotten me to work with and associate with other veterans and to get that camaraderie back that you lose when you get out," Terrell, who served 16 months in Iraq, said. "I've ran into three people who were in my unit that live in Lubbock that I didn't know they were here. It's been therapeutic sharing our experiences together."

On Saturday, Tech football players did not just wear red and black. Their uniforms and cleats featured camouflage designs and each Red Raider had "Freedom" on the back of their jersey.

Texas Tech's sponsor Under Armour has partnered with the Wounded Warrior Project, a non-profit organization that provides programs and services for injured service members and their families, as part of the UA Freedom initiative to support our nation's military and public safety heroes. The jerseys were auctioned off on Texas Tech's website on Monday and 100 percent of the proceeds went to the Wounded Warrior Project.

Terrell and Hunter said they believe that the Wounded Warrior Project coming to Texas Tech was important and was great recognition. It helped people see these men and women were not solely names in a newspaper.

"A lot of people know that people come back wounded from either Iraq or Afghanistan, but they don't realize the amount unless it's someone in their family," Hunter said. "For them to come here and to auction off the uniforms to benefit the Wounded Warrior Project is amazing. It's probably one of the coolest things I've seen Tech do so far for veterans."

Both men carried flags onto the field this weekend prior to the start of the game. It was also homecoming, which brought a whole new meaning to the soldiers.

"It's hard to put into words but it's carrying what you represent and what you fought for," Terrell said. "I wouldn't know how to describe it. Definitely proud."