Researchers with a conservation alliance based at Texas Tech have found a quail loaded with high levels of the antibody that fights West Nile virus. 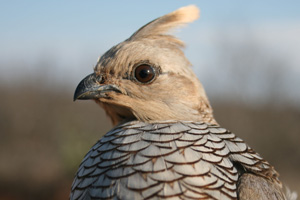 Some quail might be carriers of the West Nile virus.

Researchers with a conservation alliance based at Texas Tech have found a quail loaded with high levels of the antibody that fights West Nile virus, officials said today (Oct. 7).

The small bird, known as a scaled or blue quail, was captured in Potter County by a team from Quail-Tech Alliance, a partnership between Texas Tech's natural resources management department and Quail First, a Dallas-based non-profit quail conservation organization.

"The high level of detectable antibody is indicative not only of a possible current infection, but to past viral exposure," said Kristyn Urban, a doctoral research assistant from the university's Institute of Environmental and Human Health. "The presence of antibodies to West Nile virus suggests that quail might show resistance to this virus or perhaps be another host to the life cycle of the virus."

Future steps to test the theory need to occur, including identifying present infection in quail and assessing any outward symptoms, added Anna Gibson, another doctoral research assistant from the disease surveillance team. Earlier studies have suggested that some birds might be carriers of the West Nile virus with no outward signs that they're infected.

Still, the presence of the West Nile virus could adversely affect the bird's response to more common illnesses, changes in environment, food shortages and natural predators, she said. West Nile virus was first detected and reported from birds and mosquitoes in West Texas during the summer of 2002. Coincidentally, it was the Texas Tech team that also made those initial West Nile discoveries.

"We hope to be able to gain much more information regarding how quail species in this region might be involved in the West Nile virus maintenance and transmission cycle," said Steve Presley, an associate professor at Institute of Environmental and Human Health and leader of the Quail-Tech Alliance disease surveillance team.

Presence of the virus in Texas' quail population is troubling since they're already under population stress. Three years ago the National Audubon Society listed the Northern Bobwhite Quail as the No. 1 common bird in decline. From 1967 to 2007, the bird's population decreased from 31 million to 5.5 million.

"Just like drought, loss of habitat or a decline in fitness, the presence of West Nile virus is a troubling sign in an already declining quail population," said Brad Dabbert, a Texas Tech associate professor and lead scientist of The Quail-Tech alliance. Quail-Tech Alliance researchers will continue to screen samples of native quail, including Bobwhites, for antibodies to West Nile virus and other viral/bacterial pathogens, he said.

Meanwhile, sportsmen concerned the birds in their area may be infected with West Nile should wear gloves when handling game, and follow other food handling procedures as prescribed by the Centers for Disease Control.

Finding reasons for the overall declining quail population and strategies to reverse the trend was the impetus behind the Quail-Tech Alliance Research Initiative. As part of the project Texas Tech is partnering with some of state's storied ranches and smaller rural properties on the project. Launched in January 2010, it's expected to encompass 22 million acres in a 44-county area in west central and northwest Texas.

The core of the project is designating an anchor ranch in each county to serve as a research and/or demonstration site for the next five years. Additional smaller ranchers in the counties also are being recruited. Participating ranches include the 6666 Ranch, Guthrie's Pitchfork Ranch, Vernon's W. T. Waggoner Ranch, Collingsworth County's Mill Iron Ranch and Archer County's Circle A Ranch.