The bronze sculpture of the Texas Tech official class ring is located southeast of the Merket Alumni Center. 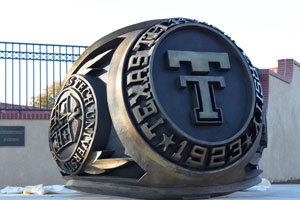 Touted as "Two Tons of Tradition," the 6-foot-3-inch bronze sculpture is an exact replica of the Texas Tech official class ring.

A project involving more than two years of development culminates with an unveiling of a sculpture, but expands a Texas Tech tradition.

As the centerpiece of the new Texas Tech Leaders Plaza, the sculpture is located southeast of the Merket Alumni Center. The ring sits upon a cast stone plaza with pavers purchased by alumni and friends of the university, and each stone is engraved with the donor's name, honors, and achievements.

Touted as "Two Tons of Tradition," the sculpture is expected to draw many visitors to the site for photo opportunities. TTAA hosts two ring ceremonies each year during which approximately 300 students receive their class rings.

In the spring of 2008, TTAA originated the concept for the ring as a part of its expansion and $4 million capital campaign. After obtaining a funding gift from Marshall Formby Foundation in Plainview and many other pledges, the project became a reality.

Balfour, the official jeweler of the class ring, created the 3D model for the sculpture. The project organizers then hired Deep in the Heart Art Foundry in Bastrop to recreate the ring in bronze to match the many sculptures that decorate the Texas Tech campus. The sculpture also features fine detail on elements like the Double T, Masked Rider and cotton bolls.

Clint Howard of the foundry explained, "The level of detail needed for a finger-size ring is far less than when cast into such a large sculpture."

For additional information on purchasing a cast stone paver visit the TTAA website.

Lessons of Business: Alumnus Learned the Ways of the Executive Early in Life

Program Gives Opportunity to Volunteer for the Alumni Association