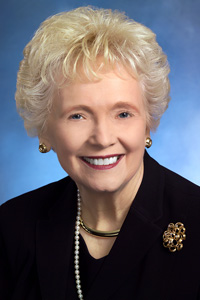 Miller served as president of South Dakota State University from 1998 to 2006.

Officials at Texas Tech announced that Peggy Gordon Miller will become the interim dean of the Graduate School Nov. 1.

"We are absolutely delighted that Dr. Miller has accepted our offer to serve as interim dean of the Graduate School," said Provost Bob Smith. "Dr. Miller brings a wealth of experience and national perspective to the Graduate School at a time when graduate education is at the core of major initiatives of our strategic plan and the university's goal of becoming a Tier One national research university.

Miller is a member of the Registry for College and University Presidents, a nonprofit organization which engages former university presidents interested in service in interim leadership roles. She will not be a candidate for the permanent dean's position.

"I am just delighted to join a team that has made such terrific progress toward Tier One status, and I look forward to creating strategies that will assure we will reach that goal," Miller said. "My ideas for doing so include fostering the development of new graduate degrees in cutting-edge fields and recruiting more of the top intellectual talent in the nation."

Miller served as president of South Dakota State University from 1998 to 2006. The university serves more than 10,000 students, has a budget of more than $150 million and participates in Division I athletics. She also served as the president of the University of Akron from 1992 to 1996, and chancellor of Indiana University Northwest from 1984 to 1992.

In 1997, she served as acting vice president for academic and international programs at the American Association of State College and Universities in Washington, D.C.

Some of Miller's accomplishments include the NAACP Golden Heritage Award, the Charles G. Herbick Chair in Leadership at the University of Akron and the ORG Ohio Woman of the Year for Lifetime Achievement in Education. She was also a fellow in academic administration with the American Council on Education, and listed in Men and Women of Distinction, Who's Who in America and Who's Who in American Women.

Miller has served on numerous boards of directors for public and private entities and worked with economic development groups in three states.