The win marks the 21st national/international championship for the school. 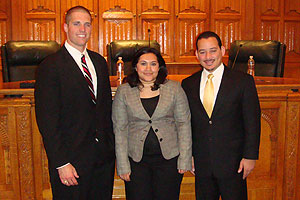 To win the competition, Texas Tech bested 13 other teams from around the nation.

For the third consecutive year, the Texas Tech University School of Law won the top prize at the National Latino/a Law Student Association competition held in New Haven, Conn. at the Yale School of Law. Texas Tech has won the title every year of the competition's short history.

The Texas Tech team consisted of third-year law student Shmyla Alam, of Garland, and second-year students Ricardo Bonilla, of Santo Domingo, Dominican Republic and Austin Pennington, of Rockwall. Alam was named Best Advocate of the preliminary rounds and Best Advocate in the final round.

Robert Sherwin, adjunct professor and director of advocacy programs at Texas Tech, coached the team to its winning title. He said the victory was particularly satisfying, and that he was happy to hear the recognition Texas Tech is earning throughout the country.

"To win this competition for the third straight year, and to beat Yale on its own 'home court,' is really something special. It's something these three students are going to remember for the rest of their lives.

"Throughout the competition, teams kept telling us that they heard we were the team to beat," Sherwin said. ;"It's nice to know that our reputation precedes us all the way to the most prestigious of Ivy League schools."