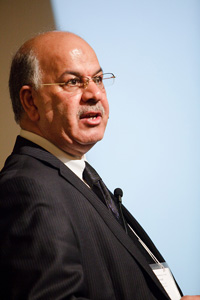 The delegation included members from Iraq's ministries on science and technology, planning, education and higher education, scientific research and minerals and industries.

Researchers at Texas Tech hosted a delegation of six Iraqi government officials intent on learning how to fund scientific and technological research and develop science policy in their country as they begin rebuilding its academic infrastructure.

"The premise of our visit is to get some advice, some help, from old friends to fund a national science foundation for Iraq, foundation that could actually draft policies for scientific research in our country limited to strategic needs of a country in formation, so to speak" said Hamid Khalaf Ahmed, advisor to Iraq's prime minister on education and higher education."

The delegation included members from Iraq's ministries on science and technology, planning, education and higher education, scientific research and minerals and industries.

During their time in the U.S., the delegation will meet with members of the National Academy of Sciences, the National Science Foundation and National Institutes of Health in Washington, D.C., Texas Tech and Sandia National Laboratories in Albuquerque, N.M, said Carl Phillips, a biology professor with Texas Tech's Center for Environmental Radiation Studies.

The meeting is in compliance with the Strategic Framework Agreement, which partly involves helping Iraq redevelop science, engineering and technology, he said. Texas Tech became involved on one of their trips to help train Iraqis to safely dismantle former nuclear facilities and map possible contamination.

"When we were in Baghdad last spring, we were drawn into this teleconference asking how the U.S. could shepherd scientific and technological growth in Iraq," Phillips said. "This is really separate from our other projects in Iraq, but it's also very important for our work, too. We've tried to put together a program that shows how a major U.S. research university supports its research and show the infrastructure and the role faculty members play with different funding agencies like the NSF."

Ron Chesser, also a biology professor with Texas Tech's Center for Environmental Radiation Studies, said he and other Texas Tech researchers will help the delegation see how researchers at academic institutions in this country find funding to do their research.

During the war in Iraq, Iraq lost many of its scientists, who were killed by insurgents or who fled the country, Chesser said. Doing the radiation work in Iraq has been difficult because of the lack of training and availability of scientists, he said.

"We just hired a post-graduate student, Peter Larsen, whose main objective is to find ways to assist Iraq to build education programs to train young people to move into technical areas for nuclear dismantlement and conduct research," he said. "Iraq has been out of the scientific development business since 1991. That's a long time. That's an entire generation of scientists that has been lost. So they're starting over at a rudimentary stage. They need some expertise and assistance and redirection in new lab facilities and new educational facilities to stimulate rapid development of scientific research and development in Iraq."

While the delegation is here, Texas Tech researchers also will discuss science, technology, engineering and mathematics (STEM) programs that encourage children to pursue careers in those fields.

"This is a huge deal," Phillips said. "This puts a high-level delegation in the U.S. and get's them to think about the way they can do research. Hopefully, they can profit from learning about the way we do this."

The U.S. Department of State's Bureau of Educational and Cultural Affairs funds and administers the International Visitor Leadership Program (IVLP), one of its premier professional exchange programs that sponsored the delegation, said Ann Stock, assistant secretary of state for educational and cultural affairs.

The IVLP is designed to build mutual understanding between the U.S. and other countries through carefully designed visits that reflect the participants' professional interests and support U.S. foreign policy goals. Participants are established or potential foreign opinion makers in government, public policy, media, education, labor, the arts, and other key fields, she said.

"Exchange programs that strengthen Iraq's scientific development and, by extension, its capacity for self-governance, support U.S. foreign policy goals," Stock said."This project is a key effort as we work with the Iraqi government to develop a science policy that supports Iraq's goals for health, education, reconstruction, economic development, and governance."