Researchers found the first complete skeleton of an early sauropod, the prototype for what would become some of the largest animals to walk the earth. 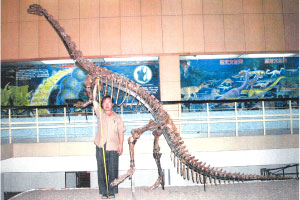 This "missing link" sauropod, Yizhousaurus sunae, is considered the prototype for what would become some of the largest animals ever to walk the world.

Its life ended in a flash – probably a flash flood, actually. And once its body came to rest covered in silt and sediment in the swollen floodplain, the "missing link" sauropod lay forgotten in the darkness of hardened rock for 200 million years.

On Sunday (Oct. 31), a Texas Tech University researcher will discuss the discovery in China of the first complete skeleton of an early sauropod, Yizhousaurus sunae, considered the prototype for what would become some of the largest animals ever to walk the earth.

Sankar Chatterjee, Horn Professor of Geosciences and curator of paleontology at the Museum of Texas Tech University, will deliver the findings during the annual meeting of the Geological Society of America in Denver. He began working on the animal in 2005 with Chinese colleagues.

This particular early sauropod's life ended in tragedy, Chatterjee said. However, his four-footed, long-necked ancestors, such as Diplodocus and Camarasaurus, would become one of the most recognizable and successful orders of dinosaurs to rule the planet until the mass extinction 65 million years ago.

"Sauropods as a group are very numerous for 160 million years during the Mesozoic," Chatterjee said. "There's about 120 species known, but most of them were later sauropods. Questions remain about how they began. Yizhousaurus will fill in a critical gap in the early evolution of sauropods."

Chinese scientists discovered two prosauropods – the precursor animals that would give rise to their larger cousins – 50 years prior near the same location in Lufeng, in Yunnan Province of South China. But Yizhousaurus sunae shows all the hallmarks of the later sauropods, such as beginning of a long neck, hardy skeleton, four-legged posture and a small, broad skull.

Researchers also discovered the intact, fossilized skull of Yizhousaurus, a rare and crucial piece to understand this animal's place in the evolution of sauropods. Only 10 percent of skulls survive, he said.

"Yizhousaurus's skull is broad, high and domed, less than a foot long with a short snout, eye sockets on the sides for scanning enemies," Chatterjee said. "It has an unusually wide and U-shaped jaw, in top view, like that seen in later Camarasaurus." 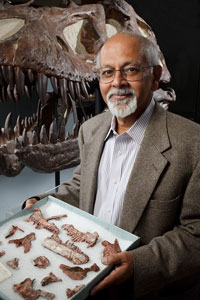 Chaterjee stands with pieces of a jaw from a prosauropod, an even earlier ancestor to the sauropods.

These prey animals measured only 30 feet long and probably lived in herds to protect themselves from predatory dinosaurs related to Dilophosaurus, a miniature version of allosaurs that lived in the area at that time.

Their lives revolved around eating the evergreen trees that populated their flood plains, he said. Numerous serrated and spoon-shaped teeth of the upper and lower jaws would slide past each other like gardening shears for cutting plant material during feeding.

"The sturdy teeth and raised neck let the animal very easily nip small branches from treetops and then chew the plant material. It could eat anything from leaves to woodier parts of the plants. The teeth could really slice. Later sauropods lost these all-purpose teeth and subsisted on soft plant material. Once the plant food was ingested, a gastric mill in the stomach probably provided further mechanical breakdown of the plant."

Most paleontologists are of the opinion that some prosauropods gave rise to sauropods, despite the fact that the transition has been very vague, Chatterjee said.

"The skull was a dead ringer for early sauropod. So beautiful. So complete," he said. "Anyone looking at this dinosaur can see it's basic body plan from which later sauropods could be derived. This is why this Yizhousaurus may bridge this gap. Not only from Lufeng, but also from Liaoning Province of China, hundreds of exquisite dinosaur fossils have been discovered in recent times. I think this century will belong to China as far as paleontology is concerned."

Map of the area where the Yizhousaurus sunae was found near Lufeng, China.

Yizhousaurus’s skull is broad, high and domed, less than a foot long with a short snout, eye sockets on the sides for scanning enemies.