After an extensive search, Kirby was the most qualified candidate. 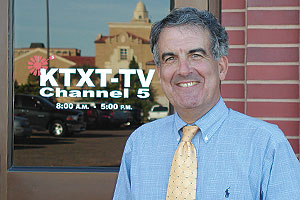 As general manager, Kirby offers a new direction and is committed to developing high-quality, locally produced programming for the South Plains region while maintaining overall budget and development goals.

KTXT-TV Channel 5, PBS affiliate for the South Plains, has announced the selection of John Kirby as its general manager. After an extensive search process, Kirby was identified as the most qualified candidate to lead the KTXT-TV team.

As general manager, Kirby offers a new direction and is committed to developing high-quality, locally produced programming for the South Plains region while maintaining overall budget and development goals.

Kirby's educational background includes a bachelor's degree from the University of Notre Dame and a master's degree in business communications from Boston University. In the broadcasting industry, he has 19 years of senior management experience in commercial and public television, and previously served as executive director at Eastern New Mexico PBS and KENW-TV/FM.

Clive Kinghorn, who has been serving as Interim General Manager, said Kirby is an invaluable addition to the team.

"The station is fortunate to find someone with his experience in public broadcasting. He has set goals to ensure the programming and service to the viewing audience is what should be expected of a public television station. We look forward to his leadership," Kinghorn said.

KTXT-TV Channel 5's vision for growth is to "Make it a national leader in the PBS community and a local media stand-out serving Lubbock and the region." KTXT-TV believes Kirby's experience proves his ability to deliver leadership and a desire for quality programming.