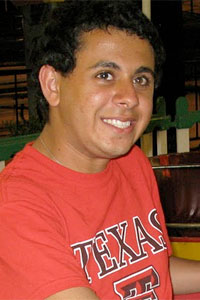 Andre Diamant is preparing to represent Texas Tech at the SPICE cup.

The 81.3 percent winning percentage was enough to give Diamant, a Knight Raiders chess team member, the second best individual score in the olympiad. His rating performance of 2644 was the sixth best overall of the event that drew approximately 1,500 players, coaches and captains from 150 countries.

Diamant, a grandmaster, played on the fifth board for Brazil. He qualified for his first Olympiad appearance in 2008 in Dresden, Germany at the age of 17.

Chess is a part of the IOC (International Olympic Committee). There have been various discussions in recent years to include chess as part of the Summer or Winter Olympics. For now the Chess Olympiad enjoys the second position behind the Summer Olympics with approximately 150 countries battling every two years.

Next Andre and his teammates will represent Texas Tech at the SPICE Cup later in October at the Texas Tech Student Union Building, Texas State Championship in November in Corpus Christi, and the PanAm Intercollegiate Chess Championship in December in Milwaukee, Wisc.

"We are so proud of what Andre achieved on the world stage in Khanty-Mansiysk where tens of millions of chess enthusiasts followed the live action over a two-week period on the internet", said Susan Polgar, director of the Susan Polgar Institute for Chess Excellence (SPICE) and head coach of the Knight Raiders. "This speaks volumes for the kind of international talent we attract to Texas Tech through SPICE."