The Texas Tech debate team had a strong return to competition at tournaments at William Jewell College and at the University of California-Berkeley. 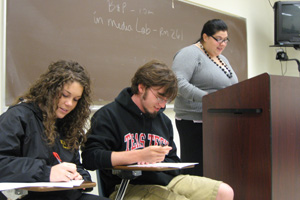 Younger Texas Tech teams were given an opportunity to shine, as seven of the eight debaters competing were freshmen, sophomores or juniors.

Coming off of multiple national championships in the 2009-2010 academic year, the Texas Tech debate team had a strong return to competition at tournaments at William Jewell College and the University of California-Berkeley.

Texas Tech was named the second-place school at both competitions.

At the William Jewell tournament, younger Texas Tech teams were given an opportunity to shine, as seven of the eight debaters competing were freshmen, sophomores or juniors.

"William Jewell was an incredibly encouraging way to begin this season," said Joe Gantt, director of forensics and the team's head coach. "All of our debaters showed that they can compete with the best in the nation, and they will only continue to grow from here. This weekend proved that this may be the deepest squad in the history of debate at Texas Tech."

Despite the youth of the squad that weekend, all of the Texas Tech teams were among the top half of teams at the competition. Among the impressive showings included fifth place (out of 48 teams) by the team of Tyler Cashiola, a sophomore communication studies major from Deer Park, and Paul Williamson, a senior mass communications major from Crosby. They defeated one of the nation's top teams from the University of Colorado-Boulder.

The ninth-place finish went to Joey Donaghy, a freshman political science major from Coppell, and Lauran Shaefer, a junior communication studies major from Sonora. Donaghy was competing in his first intercollegiate debate tournament.

The Berkeley tournament was the first competition for defending national champion Adam Testerman, a senior mass communications major from Springfield, Mo. It was also the debut of the new partnership of Testerman and senior political science major Christopher Neill from Petoskey, Mich., an incoming transfer student.

"The only thing harder than winning a national championship is defending one, but Chris and Adam have certainly put us in position to do just that," Gantt said of the Berkeley competition. "Obviously, with any new partnership, there are some kinks to work out, but we found out this weekend that those kinks are few and far between."

The depth of the Texas Tech squad continued to show as well, as Donaghy and Schaefer finished in ninth place, while Cashiola and Williamson finished in 17th place.