The campaign is geared toward student scholarships, faculty endowments and facilities of the system's three universities. 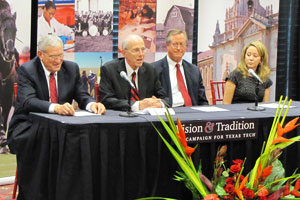 The Texas Tech University System kicked off a $1 billion fundraising campaign that will help provide the resources necessary to continue the growth and success of the system's three universities.

Vision & Tradition: The Campaign for Texas Tech is co-chaired by Ed Whitacre, chairman of the board of General Motors Co. and Jerry Rawls, executive chairman of Finisar Corp.

"Texas Tech prepared me to be a leader in business and in my community. I am so grateful for the education I received and I know a lot of alumni who share that feeling," Whitacre said. "Supporting this campaign for Texas Tech was my way to give back and I know our alumni and supporters are ready to meet this challenge too."

"I am excited to help lead this historic fundraising effort, as it will help shape future generations of students," Rawls said. "The component institutions of the Texas Tech University System not only provide exceptional academics but also promote the values necessary to develop leaders in today's global market."

Funds raised will go toward student scholarships, faculty endowments and facilities to ensure continued growth for each university.

Since 2007, when Hance became chancellor, the system has reported more than $100 million in funds raised every year; and wise, conservative investing has led to endowment growth.

In 1996, when Texas Tech became a system, its endowment stood at $60 million. In 2009, the last year for which numbers are available, the endowment was $679 million, ranking Texas Tech 84th in the country out of the 842 institutions reporting to the National Association of College and University Business Officers.