Preserving a Legacy: The Tradition Behind the Texas Tech Fight Song

'Fight, Raiders, Fight' epitomizes the tough and unrelenting spirit of the Red Raiders. 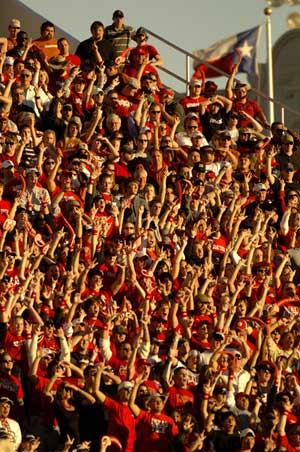 With words such as, "Fight for the school we love so dearly," the fight song unites generations of Red Raiders.

The Texas Tech fight song, with its up-tempo beat and stirring lyrics, is synonymous with Red Raider Athletics and is the essence of what Texas Tech stands for.

Known to be played numerous times at all Texas Tech athletic events, the fight song is something all Red Raiders look forward to singing. With words such as, "Fight for the school we love so dearly," the fight song unites generations of Red Raiders.

It is also part of a new game day experience, Raider Walk, as the band accompanies the football team in the walk to the locker room while blaring "Fight, Raiders, Fight" through the thousands of fans cheering on their favorite players.

Bill Dean, the executive vice president and CEO of the Texas Tech Alumni Association, associates the fight song with the band's initial march onto the field before kickoff, and said it sets the tone of the game for fans as one of Texas Tech's greatest traditions.

"Any school's fight song is a major tradition," Dean said. "We sang that fight song when I first came to Texas Tech in 1956 and it has been sung all the way through, and it was sung before then. It is something that is part of Texas Tech."

"Fight, Raiders, Fight," was written in 1936 by Carroll McMath and was an update for Texas Tech. It referred to the university's new nickname, the Red Raiders, instead of the Matadors and has lived on.

Since the fight song is a crucial component to any Red Raider's time in Lubbock, it is one of the first traditions new students learn at orientation and something all students look forward to doing in support of all athletics.

"I think we have one of the greatest fight songs in all of college athletics and combined with the great Goin' Band from Raiderland, it makes it a great tradition that is enjoyed by all of our fans," said Gerald Myers, director of athletics. "Whether it's at Jones AT&T Stadium, at the United Spirit Arena, on the baseball field or the softball field, "Fight, Raiders, Fight" is definitely one of the best."

"Fight, Raiders, Fight" truly epitomizes the tough and unrelenting spirit of the Red Raiders with its lyrics, "You will hit 'em, you will wreck 'em. Hit 'em! Wreck 'em, Texas Tech!"

Dean is enthusiastic that the fight song will be maintained as one of Texas Tech's best traditions and is confident that future generations of Red Raiders will sing the same song he did in 1956.

"We have passed on a legacy to these students and they are going to pass one on to the next generation," Dean said. "We want it to be the same tradition that has been there forever."