Beginning with Joan Rivers in 1997, now 'The Wall' of the Allen Theatre has been signed by a variety of people. 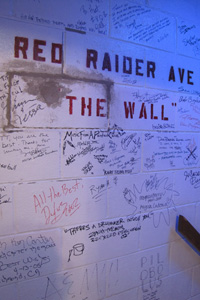 "The Wall" has been signed by those who have visited the Allen Theatre.

Most Texas Tech students have seen a presentation, listened to a speaker or enjoyed a performance in the Allen Theatre. However, to gain the full history of the theatre, you must exit stage left.

Performers walking offstage immediately find a white wall decorated with red stenciled letters spelling "Red Raider Ave" and "The Wall." Since the first signature in 1997, the wall has expanded to a nearby hallway creating a massive gallery of famous signatures and colorful messages, doodles and autographs from past Allen Theatre performers.

Bill Brannan, senior associate director of Student Union and Activities, said this is a tradition that "just kinda happened" in the same fashion as New York jazz clubs and historical opera houses whose guests left their autographs backstage after a performance.

"I'm the first. Good luck, I had a good time," wrote Joan Rivers, the first speaker to sign the wall in January 1997.

"So that's where it all started," Brannan said while gazing over the blacklight lit cinderblock wall.

Brannan pointed out high profile names such as Spike Lee, Coach Ken Carter and TOM's Shoes founder Blake Mycoskie among many others.

"Jane Goodall actually stepped up on this to sign it," Brannan said while knocking on the antique stage manager's desk that is kept in front of the wall. "She said I'm gonna sign way up there, so she got on that and went all the way to the top."

The wall features the signatures of the cast and original writers of the comedy act, Reduced Shakespeare Company. Many student casts, dance companies and other groups have also signed the wall after performing.

"My background is in theatre," Brannan said. "The wall is a nice walk down memory lane to remember events I was involved with."

Brannan pointed out the signature of the performer he said he would never forget, James Earl Jones, the original voice of Darth Vader.

Brannan wasn't the only one impressed by the celebrity's autograph. Jason Cornwell, a cast member of MTV's The Real World Boston, drew an arrow to Jones' signature and wrote, "I got to sign above Darth Vader."

Comedian Carlos Mencia also wrote an interesting message on the wall. However, Brannan said it had to be removed because it was too inappropriate.

Nazworth said performers at the Allen Theatre don't need much convincing to sign the wall.

"I don't think that anyone has to ask anymore, I think people just do it," he said. "They see all the names and they automatically just gravitate toward it. It's kind of interesting."

Nazworth said the bigger-name stars seem to be so used to signing autographs, signing walls seems like a natural thing.

This show business tradition has turned backstage at Allen Theatre into a museum of performers that will undoubtedly continue to expand as the years go by, he said.

"It's just a little bit of history, you know," Brannan said. "And it's significant because you stand back and think sometimes; wow there's been some pretty amazing people here. It's just hard to imagine."