Daniel Vitiello has multiple locations of his iPhone repair business, is writing a book and plans to further expand his thriving business. 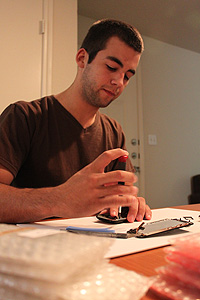 After fixing several hundred phones, Vitiello says he can probably do it with his eyes closed.

Growing up in Rockwall, Daniel Vitiello always worked with his dad on fixing broken things around the house– they always just did it themselves. He didn't know that one day the custom would help him pay his way through Texas Tech and be a viable booming business as well.

"I have always been mechanically inclined," said Vitiello, whose iPhone repair business is now paying for his college education. "I was always working with my dad on fixing our trucks, boats, laptops, basically anything that broke." He said that nowadays for things that he doesn't know how to do, YouTube takes the place of learning by trial and error.

"The first time I fixed my phone was definitely the most difficult. It took me a couple hours and I ended up actually breaking the LCD when I took it out," Vitiello said. "I guess the first time I actually decided to start repairing them for money was when I came home from school this summer."

One of his friends broke her screen in June. He ordered the part, fixed it for her, and realized he could do it in about 10 minutes. That's when the wheels started turning. After fixing several hundred phones, Vitiello says he can pretty much do it with his eyes closed.

"It takes nine turns of the screwdriver to tighten or loosen the screws," he said, showing off his familiarity with the electronic gadget.

He has never been one to work the typical hourly job. For the prior three years he had owned a landscape and fence company but sold it when he went to college.

With more than 50 million iPhones around the world there is no shortage of broken ones, so he's staying extremely busy. But, Vitiello says, he's getting a lot of requests for iPod Touches, so he's thinking of branching out to them one day, maybe.

"My actual plan for branching out right now is to help other people start their own iPhone repair businesses," Vitiello said. "My new company will sell start up packages that come with the book, parts to get started and support." A couple of weeks before school started, Vitiello held a seminar for six new startups and is in the process of writing a book about all the aspects of the business.

Investing has always been an interest to Vitiello, who says even when he was in middle school he would play on stock market simulators.

"I currently dabble in FOREX and the stock market, but my main investment at the moment is this company. I am hoping that my degree in finance will help me from an investment standpoint, but I love running businesses." 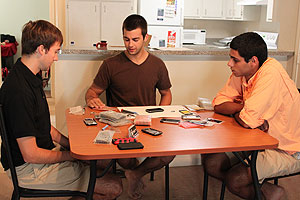 Vitiello is so busy, he’s trained his roommates, Philip Lawson, an international business major from Allen; and Amir Ravassipour, a mechanical engineering major from Plano, to take over some of the phone repairs. They are both sophomores.

When he's on campus Vitiello can usually be found at the Robert H. Ewalt Student Recreation Center, either rock climbing, lifting weights or playing racquetball. He's also in a couple of honor fraternities and associated with Sigma Nu, but with school and the business, all that could change.

"As I am taking 19 hours, I'm expecting it to be rather difficult to balance school work with doing the iPhone repairs in Lubbock and keep things running smoothly at the other companies. I'm outsourcing some of the work to my roommates."