Numerous speakers will give insight to issues concerning quail. 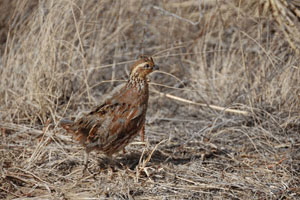 Topics of the field day include potential disease threats affecting quail and the influence of quail hunting leases on ranch and rural economies.

Producers squeezed by declining quail populations can see innovative quail management techniques along with a bird-dog training demonstration during an Oct. 23 field day at the legendary 6666 Ranch near Guthrie.

The event is hosted by the Quail-Tech Alliance, a partnership between Texas Tech's natural resources management department and Quail First, a Dallas-based non-profit quail conservation organization.

Officials note that there is no cost for attending the day's programs, but participants must register for the event prior to Oct. 15. The program kicks off with an information packet pick-up at 8 a.m. at the Guthrie Consolidated School Auditorium, located at 301 Jaguar Lane.

The morning session then moves to the 6666 Ranch with nationally-recognized dog trainer Ronnie Smith of Big Cabin, Okla., who will provide a bird-dog training demonstration. The 6666 Ranch is part of the Burnett Ranches and encompasses 275,000 acres near Panhandle and Guthrie.

During the field day Steven Presley, an associate professor of environmental toxicology with Texas Tech's Institute of Environmental and Human Health, will provide updates on potential disease threats affecting quail. Phillip Johnson, a professor with Texas Tech's Department of Agricultural and Applied Economics, will discuss the influence of quail hunting leases on ranch and rural economies.

Dabbert will outline the recent activities surrounding the Quail-Tech Alliance program and its specific research projects. These include studies on supplemental feeding, food habits and habitat management, and the importance of harvest management. Other highlights feature a discussion of quail census techniques, along with a demonstration of how quail survival and movement is monitored in the wild using technology.

Following a chuck wagon barbeque luncheon, participants will tour the 6666 Ranch's quail conservation projects. These include quail management techniques such as disking, brush management and grazing. Other areas of interest are alternative supplemental feeding methods and a hands-on demonstration of equipment used in the program's radio-telemetry studies, Dabbert said.

Three years ago, the National Audubon Society listed the Northern Bobwhite Quail as the No. 1 common bird in decline. From 1967 to 2007, the bird's population decreased from 31 million to 5.5 million.

"They're declining everywhere, but quail numbers are higher here in the Rolling Plains than other parts of the country," Dabbert said.

Finding reasons for the overall declining quail population and strategies to reverse the trend was the impetus behind the Quail-Tech Alliance Research Initiative. As part of the project Texas Tech is partnering with some of state's storied ranches and smaller rural properties on the project. Launched in January 2010, it is expected to encompass 22 million acres in a 44-county area in west central and northwest Texas.