Alvin Davis will be recognized for his lifetime achievements and contributions to 4-H. 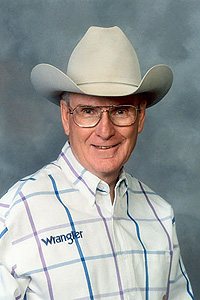 The Post native was among 16 honorees from around the country selected to receive the annual honor.

Alvin Davis, a Texas Tech alumnus and prominent leader in the cowboy culture and ranching heritage movement, has been named to the National 4-H Hall of Fame.

The Post native was among 16 honorees from around the country selected to receive the annual honor.

Hall of Fame Award recipients are recognized for their lifetime achievements and contributions to 4-H, officials noted. As a sophomore at Texas Tech, Davis received the Moses Trophy, a historical national 4-H leadership award. At the time it was the highest honor that a 4-H club member could receive.

Davis’ induction ceremony will be held Oct. 8 at the National 4-H Youth Conference Center in Chevy Chase, Md. He will be the first former 4-H member from Texas to be inducted, though five former 4-H extension agents have been inducted from the Lone Star state in the past.

Davis received a bachelor’s degree in animal husbandry from Texas Tech in 1952. While at the university he was president of the Texas Tech 4-H Club and Texas Tech Rodeo Association. He was director of the rodeo association’s first National Intercollegiate Rodeo Association-approved rodeo in 1950.

Following graduation Davis worked as executive vice president and a director at two national banks in the region, and later operated a mail order western awards business and owned several western retail stores. Eventually he returned to Lubbock to serve as executive vice president and general manager of the National Ranching Heritage Center. During that time he founded National Cowboy Symposium & Celebration.

Back to School Fiesta Champion for Education Named