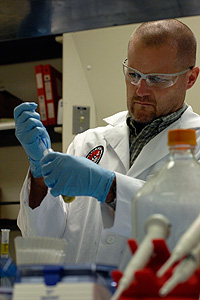 TIEHH researchers were asked to test the seafood samples prior to the federal government’s opening of waters to fishing on Monday.

After receiving a shipment of Louisiana seafood samples collected by a reporter with “Good Morning America,” researchers at Texas Tech found no evidence of petroleum hydrocarbons.

Though these samples were clean, the sample size was small and more research is necessary before the full picture can be seen, said Ron Kendall, director of The Institute of Environmental and Human Health (TIEHH).

“Our detection limits would have detected selected polycyclic aromatic hydrocarbons (PAHs) had they been there, even at very low levels,” Kendall said. “Everyone should realize the sample size was extremely small and that these data represent just a snapshot of time and space. We believe sampling and analyses should continue, and that independent science-based research needs to continue.”

Scientists are concerned about PAHs because some of them are known carcinogens.

Producers with the morning news program asked TIEHH researchers to test the seafood samples prior to the federal government’s opening of waters to fishing on Monday. Reporter Matt Gutman sent the samples from Bastian Bay, La., where he is reporting.

“We collected the samples Monday in Bastian Bay,” Gutman said. “It is an area where we've found oil on the sediment. We filmed it all, including the bagging. The fishermen used a net, but found no evidence of oil directly on any of the samples.”

Gutman’s samples included shrimp, of which nine were tested from three separate locations, four oysters, two bait fish, a flounder and a speckled trout. They were shipped on ice overnight to the institute on Tuesday and Wednesday, where they were received in excellent condition and smelled fresh before processing.

Once tissues were extracted, scientists analyzed them using gas chromatography with mass spectrometry, said Todd Anderson, an environmental chemist at the institute. The process is used to determine substances within a specific test sample, and is widely regarded as the gold standard for forensic substance identification.

“We were particularly interested in polycyclic aromatic hydrocarbons, some of which can be carcinogenic,” Anderson said. “The analytical results revealed that the PAHs we analyzed for were below detection limits of our instrumentation, and far below any levels of concern as regulated by the U.S. Food and Drug Administration.”

Trace Analysis Inc. of Lubbock, a certified laboratory in Texas and Louisiana, assisted with the analysis.

This project took five days to complete and was done without support from BP or the United States Federal Government.