Ron Kendall, director of TIEHH, called for more independent, peer-reviewed research before any determinations could be made on the oil spill’s long term ecological effects. 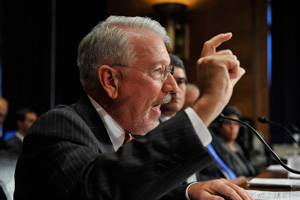 Kendall said there is very limited information on the environmental fate and transport of the mixture of dispersant and oil, particularly in the deep ocean.

The unprecedented use of dispersants on the oil spill has created a massive ecotoxicological experiment of which the full impact is yet to be determined, a Texas Tech University researcher testified today (Aug. 4).

Speaking to the Senate Committee on Environment and Public Works, Ron Kendall, director of The Institute of Environmental and Human Health (TIEHH) at Texas Tech, called for more independent, peer-reviewed research before any determinations could be made on the oil spill’s long term ecological effects.

“We have very limited information on the environmental fate and transport of the mixture of dispersant and oil, particularly in the deep ocean,” Kendall said. “We have very little information on the ecological effects of this particular oil and dispersant mixture in terms of acute, chronic and indirect effects on marine and coastal organisms. And given the volume of oil and dispersant that have been released into the Gulf of Mexico, we have a very poor understanding of the ultimate ecosystem level effects which may occur in the weeks, to months, to years ahead.”

Kendall said he thought dispersant use has resulted in much of the oil released from the Deepwater Horizon site to remain suspended in the gulf and dispersed in the water column.

Though using the reported 1.8 million gallons of dispersants kept much of the oil from the beaches and marshlands as it intended, it didn’t reduce the amount of oil in the environment, he said. Instead, it thinned the oil, possibly making it more available for exposure and uptake by animals and plant life in the ocean.

At those depths, the lack of light, oxygen and petroleum-eating microbes could mean that the dispersants and toxic parts of the oil may be suspended and preserved deep below the surface, causing long-term problems for deep-sea life.

When dispersants meet crude oil, it alters the chemical and physical properties of the oil, changing how the oil behaves in the environment, Kendall said. 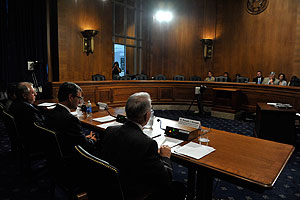 According to Kendall, critical data gaps still exist regarding the fate, transport and effects of the dispersed oil, particularly in deep water and on deepwater-dwelling organisms.

Crude oil is a complex mixture of thousands of chemical compounds. From a toxicological standpoint, compounds called polycyclic aromatic hydrocarbons (PAHs) cause the most concern as many are carcinogenic.

Though scientists already have determined that the oil has a lower content of the PAHs, more are created through the burning of oil that has floated to the surface, he said.

“Simple aromatics, such as benzene, toluene and xylene are volatile and rapidly lost from the oil in most instances,” he said. “But it is not clear what impact the depth of the well and the use of dispersants at that depth might have on the fate of the volatile components in the oil.”

Kendall said the recent efforts by the EPA to characterize dispersant toxicity to marine life represent a step in the right direction in the development of a weight-of-evidence approach to assessing the impact of dispersant use. But critical data gaps still exist regarding the fate, transport and effects of the dispersed oil, particularly in deep water and on deepwater-dwelling organisms.

“It should be noted that nearly all research conducted on the chemical fate, transport and toxicity of dispersants and dispersant-oil mixtures has been performed in settings and under conditions vastly different than those that exist deep in the gulf where much of the dispersants have been applied,” he said.

Dispersant use also could wreak havoc on populations of endangered or threatened wildlife in both direct and indirect ways, he said.

The Kemp’s ridley turtles are highly susceptible to stressors such as oil spills and hundreds have been reported dead since April. Young turtles may face even more problems should the oil and dispersant kill off floating Sargassum seaweed they use for cover and a place to rest.

“If oil affects the food supply of the Kemp’s ridley or disturbs critical stages of its life cycle, we may not see oiled, dead Kemp’s ridleys, but their population abundance could be imperiled by subtle indirect effects resulting from dispersed oil in the environment,” he said.

Kendall hoped the hearing would encourage the scientific community to generate much-needed data related to the use of dispersants in response to the Deepwater Horizon oil spill.

“Like everyone else, I received news that the well has been capped with great relief and guarded optimism,” Kendall said. “I believe there is an urgent need for independent, applied research to fill data gaps on the potential impacts of dispersed oil on gulf wildlife. Hopefully, information generated in future studies will aid in the assessment of effects, identification of effective remedial strategies and with the restoration and preservation of the Gulf Coast ecosystem.”