The mascot ranks ninth in The Associated Press poll. 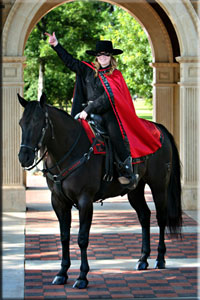 The Masked Rider is one of the most recognizable college mascots in the country.

The Masked Rider, a worldwide symbol of the strength and prestige of Texas Tech, was named by The Associated Press as the ninth best mascot in college football.

"This is a tremendous honor and we would like to thank the many voters of The Associated Press for recognizing our Masked Rider program," said Director of Athletics Gerald Myers. The AP recognizes something that we Red Raiders have known for a very long time, in that the Masked Rider is very special in college sports and represents the great strength of the students and alumni of Texas Tech University. Nobody makes a better entrance on Saturday's than the Masked Rider, and I would like to pay tribute to Christi Chadwell, our current rider, and all the former riders that have come before her. Their service and representation of Texas Tech is unparalleled."

The AP ranked the Top 12 mascots in college football and two other Big 12 institutions made the list. Ralphie, the buffalo from the University of Colorado, topped the poll while Texas' Bevo ranked seventh.

About the Masked Rider

On Jan. 1, 1954, Texas Tech fans attending the Gator Bowl in Tampa, Florida, witnessed the evolution of a beloved tradition that Red Raider fans would embrace for decades to come. Dressed in black with a long flowing cape and mounted on a solid black horse, Joe Kirk Fulton caught the eyes of the nation when he charged onto the playing field to lead the Red Raider football team. Ed Danforth of the Atlanta Constitution wrote, "No team in any bowl game ever made a more sensational entrance." The dramatic entry by the horse and rider electrified the crowd as well as the team, which beat Auburn 35-13.

Fifty-six years later, the Texas Tech Masked Rider is one of the most recognizable college mascots in the country. Wearing black riding clothes, mask, bolero hat, scarlet cape, and perched atop Midnight Matador, a jet black quarter horse, the Masked Rider is a colorful symbol of school spirit and pride. The Masked Rider leads the team onto the field before each home game and appears at other Red Raider sporting events. The rider and horse also represent Texas Tech at rodeos, parades, civic events and school activities around the state.