Go behind the scenes as Texas Tech players and coaches survive one of Big 12 football's largest media events. 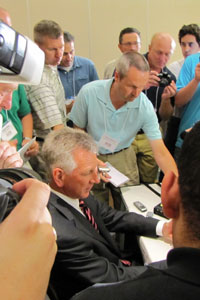 The blood is in the water and the sharks are circling. Huge sharks with microphone bellies and flashbulb eyes. Teeth gleaming, hair polished, eyes zeroed in, they press and push.

Coach Tommy Tuberville slides through the hustle and gleam, his hand out, a smile on his face, cool and charming and collected in his suit and tie. Red and black. Sharp.

You get the sense that he’s been here before, and in a way he has. If not the Big 12 Conference Football Media Days, precisely, then certainly he’s witnessed the spectacle of college sports reporting. He’s got his lines ready as he navigates the conference rooms of the posh Westin-DFW North.

“It’s good to be back coaching after spending a year working on you guys’ side of the ball,” he says in reference to his recent stint as an analyst for ESPN.

Then he’s off again, hustled through the crowd by members of Texas Tech’s Athletics Communications team. He flows past the rows of tables where radio personalities fire questions at players and coaches.

He sits down, mics up, banters while doors close and people hush. He fields the questions – the same questions he has fielded a dozen times already and will field a dozen times more before the grind lets up around 1 p.m.

“What’s the difference between the SEC and the Big 12?”

“Why did you bring two quarterbacks?”

This second question references Taylor Potts and Steven Sheffield, two equally matched Red Raider signal callers who are vying for the starting position. Both of them flew to Irving to attend the event.

The question also gives Tuberville one of his best openings for a one-liner.

“I brought two quarterbacks because I thought we’d have a contest,” he quips before the camera rolls. “After all the interviews, I figure we’ll let you folks in the media vote on which one should start for us this season.”

After the interviews, Tuberville handles special requests. Every network wants a little something extra while they have him in front of the camera. For Fox, it’s a shout-out to troops serving in Iraq and Afghanistan that they can air during big games. 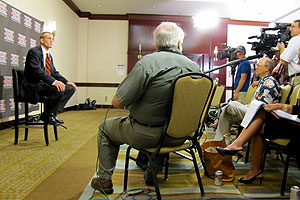 Quarterback Steven Sheffield moves from microphone to microphone in a dance that’s choreographed like clockwork.

Tuberville looks at the script he’s supposed to read and suggests a change.

“It says defense, but I think it’s supposed to say offense,” he says in his mild way.

“I like it,” pipes up someone from the back of the room. “An audible from the line. Change the play.”

Dazed but Not Confused

Such is the phenomenon that is Big 12 Media Days: part press conference, part beauty pageant. Players grinning, coaches growling, jostling through crowds of sports reporters who have swooped in to fill their plates with stories as the nation gears up for football season.

It’s a well-orchestrated machine that comes off as sheer chaos. Three days of intensive storymongering as representatives from each Big 12 school present themselves. Four schools each day. For Texas Tech, that day is Tuesday, the second day, sharing space with Oklahoma State, Missouri and Kansas State.

Tuberville and three players – Potts, Sheffield and defensive lineman Colby Whitlock – move from microphone to microphone in a dance that’s choreographed like clockwork.

At 9:10 a.m., they move to national TV, then an hour later, local and regional stations. While the big dogs get their own rooms, the smaller stations have to share their interviews.

These interviews take place in one conference room, where dozens of stations cluster their cameras around five stools. The players move from stool to stool, walking maybe ten feet before settling in again to answer questions. 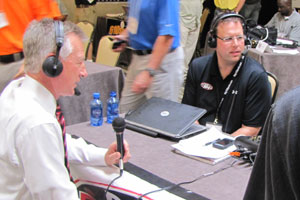 To Sheffield: What do you think about the quarterback situation?

“It definitely sends the message that the position is out there. The best man’s going to win it.”

To Potts: What are your thoughts on the quarterback situation?

To Whitlock, it’s the same. Over, and over. And come noon, Tuberville moves on to the granddaddy of all interviews as he steps to the podium in front of the ranks of hundreds of print reporters.

These writers sit behind their laptops, typing away as he gives his opening statement.

“It’s good to be back coaching after spending a year working on you guys’ side of the ball,” he says – or makes some variation on the statement. It’s hard to say what he’s said anymore. But he still looks sharp. Relaxed. He still grins and quips and slides through the gleam.

The players, too, they seem weary but they keep grinning and answering questions. Even after their official tour is finished, they disappear into the corners to conduct one-on-one interviews with writers.

By the time they finally make their way to the buffet line for lunch, the plates are all gone and the enchiladas are congealing. And still there’s no time for a break. They are running late for their flight back to Lubbock.

Potts, Sheffiled and Whitlock make a quick trip to their rooms to change out of their suits and grab their luggage. Then they are hurried out of the building to grind their way through Dallas traffic as the clock ticks down to departure time.

Does anyone sweat it? Nah, they’ve already survived the true wringer.