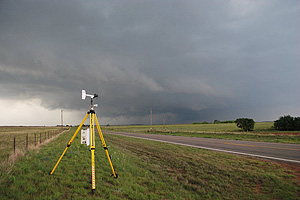 Researchers are now beginning to dig through the data gathered during the recent Verification of the Origins of Rotation in Tornadoes Experiment.

While others seek shelter from the storm, Texas Tech researchers go face to face with Mother Nature. These brave scientists are trying to solve the mystery of tornado genesis, and after six weeks of intense storm chasing and data collection, they just might have some of the answers.

Researchers are now beginning to dig through the data gathered during the recent Verification of the Origins of Rotation in Tornadoes Experiment 2 (VORTEX2), an $11.9 million project funded by the National Science Foundation (NSF) and the National Oceanic and Atmospheric Administration (NOAA). The 2010 field portion of the project lasted 45 days and involved about 120 people, including 18 Texas Tech researchers, more than 40 vehicles and an array of data-collecting instruments from Doppler radars and unmanned drone aircraft, to StickNet probes and weather balloons.

The purpose – to discover the origins of tornadoes in order to better predict when and where storms will pop up, determine how severe they will be, and in turn, improve alert systems by increasing warning times.

“The ideal warning system is one that has an appreciable lead time that allows people enough time to get out of the way,” said Chris Weiss, assistant professor of atmospheric science at Texas Tech and principle investigator for the VORTEX2 mission. “Right now, I would say our lead times are probably short enough that getting out of the way is not really an option in most cases.”

But in an unstable atmosphere, how do you predict exactly where a tornado will form hours ahead of time? That’s exactly what these scientists are trying to discover.

“There is so much uncertainty in the atmosphere. It’s very mathematically elegant, it’s defined as chaos,” Weiss said. “A lot of people hear this notion of a butterfly flapping its wings causing tornadoes. It might be slightly exaggerated but in some ways there is some truth to that. Those very small perturbations in the atmosphere cause huge perturbations downstream when you integrate it over a long time period. So that is something we’re really trying to figure out – is hours in advance, trying to pin down exactly where the tornado will happen at exactly what time.”

The only way to truly discover the mystery of tornado genesis is by collecting data out in the field. Texas Tech used two observation platforms during VORTEX2 to collect data, the StickNet probes and the TTUKa mobile Doppler radars.

The StickNet array consists of 24 portable weather stations designed and built by Texas Tech students in the Atmospheric Science Group and the Wind Science and Engineering Research Center that measure temperature, humidity, pressure, precipitation, and wind speed and direction. The probes were deployed directly in the path of the storms. In the 2009 phase, StickNet teams deployed 221 probes during the project. This year, teams dropped 429 probes, which make an even 650 for the two seasons combined.

The two TTUKa radars, also designed and developed by Texas Tech, provide high-resolution capabilities to capture the structure of the small-scale variability of the wind and measure the horizontal and vertical structure of tornado cyclones. Together, the two platforms work to provide a three-dimensional view of the wind field at the lowest levels of the atmosphere.

“We saw some unprecedented structure on these supercell thunderstorms,” Weiss said. “The storm itself is responsible for generating boundaries that may be relevant to tornado genesis. We have noticed that the position and intensity of these boundaries varies some between tornadic and non-tornadic cases. We’re thinking we might have some interesting data that will allow us to discern which storms have better tornado potential, but time will tell.”

It takes a certain breed of character to race toward the storm and position equipment as close as possible to the tornado path in order to get the best data. Weiss said it’s an adrenaline-pumping experience that is not for the faint-hearted.

“There are moments where the pulse quickens a little bit. There was a situation this year up in Nebraska near the town of Bridgeport. It was early evening but it was black as night. There was a very strong tornadic storm that was coming across the northern side of the city. It was blowing really strong; we call it ‘outflow from the storm.’ We were in a safe position south of it, but you really couldn’t tell. To a local out there, I’m sure the sirens blaring and the wind blowing and just the lack of visibility was very frightening.” 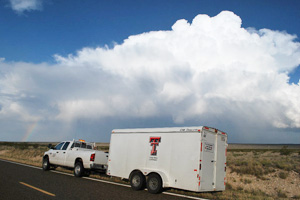 Researchers intercepted 30 supercells and at least 10 short-lived tornadoes during VORTEX2, which will be used to help bridge the gap to understand actual tornado production.

Researchers intercepted 30 supercells and at least 10 short-lived tornadoes during VORTEX2. Similar to the 11th hour LaGrange, Wyo., tornado intercept during the 2009 season, the researchers had a break close to the end of 2010 season on June 13 in Booker, near the Texas panhandle/Oklahoma panhandle borders, when strategy and a little bit of luck positioned them in the perfect place for an ideal intercept.

“We actually had the StickNet down ahead of the genesis of a tornado,” Weiss said. “The tornado formed maybe one or two miles, maybe less than that, east of the position. So we got those critical measurements of temperature, pressure, humidity and wind immediately preceding the tornado, and that was really our No. 1 goal.”

Weiss and his team are developing a systematic way to quality control the data and make sure everything is properly logged before giving it the Texas Tech seal of approval and releasing it to the public. The data will be used in publications and at upcoming conferences, and will also form a large portion of thesis and dissertation work performed by graduate students involved in the project.

Weiss hopes the data acquired during VORTEX2 will help bridge that gap to the actual tornado production itself. But the research doesn’t end here. He would like to continue to carry out smaller-scale versions of the project on a more local and regional level in order to obtain the ultimate goal of unlocking the mystery of the tornado.

“I think we are going to have some very interesting data that pertain to the genesis of a couple of weak to moderate tornadoes. I think that is going to be very, very important for the science,” Weiss said. “At this point in our science, I think we are pretty good at predicting the parent thunderstorms of the tornadoes, the supercell thunderstorms, but we struggle at predicting when the tornadoes will actually develop and when they won’t within those storms.”