Texas Tech President Named to NCAA Board of Directors

President Guy Bailey has been appointed to represent the Big 12 Conference. 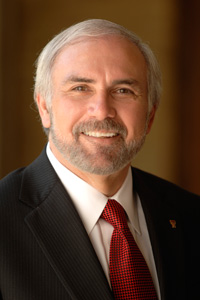 President Guy Bailey has been appointed to represent the Big 12 Conference on the NCAA Division I Board of Directors. Bailey replaces University of Nebraska Chancellor Harvey Perlman.

“I am honored that my colleagues chose me to represent the conference on the NCAA board,” Bailey said. “I’m also proud to represent Texas Tech University in this prestigious position. I am looking forward to serving with the other board members.”

The board is the division’s principal leadership body, establishes general policy for the NCAA and has the final vote on measures affecting the membership. The board comprises presidents and chancellors from 18 conferences.

“This appointment is reflective of the strong leadership we have at Texas Tech University,” said Gerald Myers, Texas Tech director of athletics. “The NCAA Division I Board of Directors is the most powerful group within the NCAA structure and Dr. Bailey is a strong choice to represent the Big 12 Conference.”

Bailey is the fifteenth president at Texas Tech and has served the university in that role since August 2008. Bailey came to the university from University of Missouri, Kansas City, where he was president from 2006-2008.

Among other duties, the board oversees the Infractions Committee and the Committee on Academic Performance.