The director of SPICE signed on as an official representative for Norway's bid for the 41st Chess Olympiad to be held in 2014. 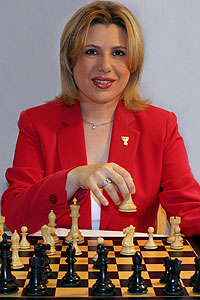 In addition to being an award-winning chess journalist, the Hungarian-American Grandmaster is founder of the Susan Polgar Foundation.

The director of Texas Tech’s Susan Polgar Institute for Chess Excellence (SPICE) and coach of Texas Tech’s Knight Raiders chess team signed on as an official ambassador for Norway’s bid for the 41st Chess Olympiad to be held in 2014.

“I can announce with great pride that the chess ambassador program for the Tromsø bid now also includes Grandmaster Susan Polgar,” said Jøran Aulin-Jansson, vice chairman of the board for Tromsø 2014 and Norwegian Chess Federation President. “A journalist, organizer and promoter of the game, as well as a famous player, Susan brings an impressive range of experience to the team.”

Organizers noted Polgar’s career credentials, which include winning four Women’s World Championships and earning 10 overall medals as a five-time Women’s Olympic Champion. Polgar has never lost a game in a Chess Olympiad, they said, and still holds a record 56-game scoring streak on board 1. Susan was the first woman to earn the men’s Grandmaster title in regular competition.

In addition to being an award-winning chess journalist, the Hungarian-American Grandmaster is founder of the Susan Polgar Foundation, a non-profit corporation supported by charitable donations that aims to promote chess and its educational benefits throughout the United States for young people – especially girls.

“It is a great honor to have the most famous female chess player and personality in the world as part of our team and we are looking forward to developing this cooperation into a successful partnership for the 2014 Chess Olympiad,” said Morten Sand, international advisor for Tromsø 2014.

Polgar said she looks forward to the task of bringing the Chess Olympiad to Norway.

“I have visited Tromsø and can personally say it is a beautiful city, well equipped to be an excellent choice for the Chess Olympiad 2014,” Polgar said.

Graduate Student Named a Master in the Chess World