The program is an outgrowth of faculty involvement in the reconstruction of science, technology and engineering capacity in Iraq. 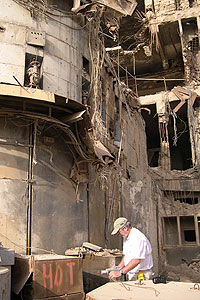 Their target stands only 11 miles away, but it literally takes an army to get there.

As they sit in armored vehicles or wait for helicopter escorts to Al-Tuwaitha Nuclear Research Center near Baghdad, a ruined nuclear facility that may have caused contamination issues for villagers near it, Texas Tech researchers Ron Chesser, Carleton Phillips and Brenda Rodgers sometimes contemplate how things have changed since they began helping the Iraqi people in 2003.

Even in April and May, Iraq is hot, dusty and dangerous. It might as well be a million miles away from the safety of the Ivory Towers of academia–a point that is driven home when they think of fellow scientists from Iraq who have lost their lives to the insurgents or fled the country.

Though all have noticed a marked difference in favor of stability for the war-torn country, it’s never enough to make anyone relax. If the U.S. Embassy detects a credible threat, the day’s research is scrapped. The team also has learned to bring everything they may need. Basic lab supplies, such as microscopes and centrifuges, rarely work when they are available.

“We’re trying to identify what radioactive materials are still present on site, how they’re distributed and how to safely move those into permanent radioactive waste facilities,” Chesser said. “We’re helping Iraq build a lab facility similar to the one I built in Ukraine to analyze radiation in soils, rubble, metal or water to do radiation assessments. This will help them sort the materials from dismantlement process to determine whether the materials are radioactive waste, or can be reused or buried in a landfill. That lab is going to be critical for their use in the future of dismantlement.”

But the project is more than just an assist. All three scientists consider their work an opportunity for diplomacy through science. The Texas Tech program is an outgrowth of faculty involvement in the reconstruction of science, technology and engineering capacity in Iraq.

After Desert Storm in 1991 and the looting in 2003, uranium contamination became a problem for Iraqi villagers who lived near 12 of Saddam Hussein’s enrichment plants.

Chesser said that Al-Tuwaitha, originally created by Hussein to enrich plutonium for a weapons program, was bombed by the Israelis in 1981. Hussein continued the program at the other facilities to enrich uranium. These met their end in 1991 during Desert Storm and wiped out his nuclear weapons programs.

But the bombing released radioactive materials into the environment, then the looting that followed also played a role in dispersing them as well. 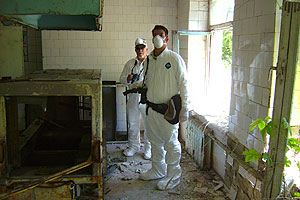 The center has continued its role in the dismantling and disposal of Iraq’s former nuclear weapons facilities and research on public health in villages close to the main facility near Baghdad.

Thanks to more than $2.3 million in grants from the U.S. Department of State and the United Kingdom, these three scientists with Texas Tech’s Center for Environmental Radiation Studies continue dismantling the old uranium enrichment plants, getting a better understanding of the public health impact of the contamination and helping train Iraqi scientists to safely continue the dismantling process.

“Our main project is to assist the government of Iraq to dismantle the former nuclear systems program,” said Chesser, “It also provides representation on the U.S. official delegations to the International Atomic Energy Agency (IAEA) in Vienna. Iraq has been very cooperative in this venture because it’s important to them as a new nation to prove it’s complying with international law and is going to be a responsible nation.”

Grants from the U.S. Department of State support the center’s continued role in the dismantling and disposal of Iraq’s former nuclear weapons facilities and for its research on public health in villages close to the main facility near Baghdad, Chesser said.

But getting a handle on the situation has been difficult because of the lack of training and availability of scientists, he said.

“We just hired a post-graduate student, Peter Larsen, whose main objective is to find ways to assist Iraq to build education programs to train young people to move into technical areas for nuclear dismantlement and conduct research,” he said. “Iraq has been out of the scientific development business since 1991. That’s a long time. That’s an entire generation of scientists that has been lost. So they’re starting over at a rudimentary stage. They need some expertise and assistance and redirection in new lab facilities and new educational facilities to stimulate rapid development of scientific research and development in Iraq.” 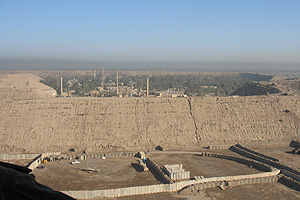 Because Hussein’s Atomic Energy Commission never followed international safety rules when dealing with uranium, the new government of Iraq is now depending on help to become compliant.

Carleton Phillips, a professor of biology, has worked in Iraq since 2003.

While on loan from Texas Tech to the State Department as a William Foster Fellow, he started the university’s involvement in Iraq and put together the State Department’s program to redirect Iraqi weapons program scientists to more civilian scientific endeavors. He worked in the Bureau of International Security and Nonproliferation and also served as special advisor on nonproliferation to the Coalition Provisional Authority.

Phillips said that Hussein’s regime never lived up to its treaty obligations or followed international law. Now, the new government is trying to follow those international rules by attempting to assess and clean up the mess and protect people living near contaminated areas.

“The driving force behind the weapons program in Iraq in the 1980s was their war with Iran,” said Phillips. “Iraqis thought they might lose. So they deployed and used chemical weapons against Iran and even their own citizens, tested biological weapons and tried to develop nuclear weapons.”

Because Hussein’s Atomic Energy Commission never followed international safety rules when dealing with uranium, the new government of Iraq is now depending on help to become compliant, he said.

“The broader idea is that going through this process will have a broader impact on their sense of quality control and quality assurance with regard to their handling of nuclear materials,” he said. “Those were the things that were squashed during the Hussein regime. They developed an attitude that international standards no longer apply to them. It’s hard to get back to that once you drift away. You have to change your whole work style and sense of ethics back to what is regarded as the international norm. The next level is to give them capability of establishing their national credibility to the point the U.N. lifts sanctions that are still in place on Iraq.”

Like Chesser, Phillips echoed the need for more higher education support and is currently trying to convince the new Iraqi government to think in terms of rebuilding the educational pipeline to fill the scientific, technical and engineering ranks.

“There’s this challenge of nation-building going on and trying to help Iraq build and maintain a democratic, functioning government,” Phillips said. “I’ve watched and participated in the evolution of that government and the challenge of creating functional ministries. I’m committed to the idea that science, engineering and technology are crucial to the restoration of Iraq as a stable, democratic ally in the Middle East.” 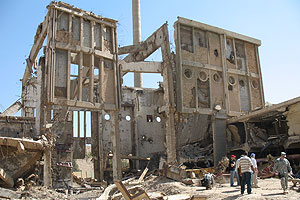 The team is looking for evidence of contamination of people living in villages near the sites, and wants to assess whether there are any adverse effects on the health of those people.

Brenda Rodgers, assistant professor of biology, is a co-investigator with the program. In 2005, she and others began plans for a massive public health testing program to determine potential health risks to those living near the contaminated areas.

This year, she was able to collect her first samples.

“What we’re trying to determine at this point is if there has been any exposure,” she said. “That’s our first step here. In these populations around Al-Tuwaitha, are there many indications of exposure to yellowcake that was looted and dumped in area. There have been lots of reports to that effect, but there are not any data out there to support or refute that.”

While uranium often is associated with cancer, she said that the isotopes aren’t readily absorbed by the body. More often, uranium stays in the body’s kidneys and causes nephritis.

“What we want to do is see if there is evidence of contamination of people living in villages near these sites,” she said. “We want to assess whether there are any adverse effects on the health of these people. The problem is that rumors abound, and there’s a lot of presumption that people are being poisoned by radiation. Similar rumors led to widespread fear and unsubstantiated reports of death due to radiation sickness from Chernobyl.

“But we want to find out scientifically if there is any danger. If there is, we’ll report our findings to the appropriate ministries in Iraq.”

She, too, is starting from scratch and training Iraqis in proper sampling techniques, data collection and statistical analysis. On the last trip, she and her doctoral student, Eric Howell, worked from a makeshift portable lab. With equipment and supplies packed in pelican cases, the team transformed a hotel conference room to meet their needs.

In October, she said the team will work in labs at Iraq’s Radiation Protection Center.

“There has been some equipment purchased and provided by the Civilian Research and Development Foundation here in the U.S.,” she said. “Part of what we’ll be doing is training the Iraqis on the new instruments they’ve received and assess what capabilities currently exist in their labs at this time. Absolutely, this is like rebuilding after a disaster.”