The Center for Pulsed Power and Power Electronic's research has been used by the Department of Defense and the Navy. 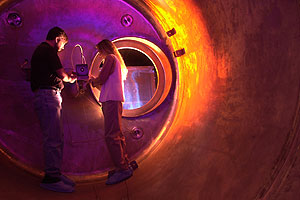 Considered the nation’s university leader in pulsed power research, the center has directed two five-year university research initiatives supported by the Department of Defense and is participating in a third.

Researchers in Texas Tech’s Center for Pulsed Power and Power Electronics have been instrumental in the United States Department of Defense’s efforts to combat improvised explosive devices (IEDs). The center’s research was recently referenced in a Popular Mechanics story on the Navy’s research in defeating IEDs.

Considered the nation’s university leader in pulsed power research, the center has directed two five-year university research initiatives supported by the Department of Defense and is participating in a third. A primary goal of the center’s research is to discover various avenues of disabling electrical systems from a distance, including IEDs and car bombs, before they maim and kill civilians.

“It should be clear to everybody that the IED problem will stay with us for the foreseeable future, with pulsed power providing several key methods of combating the issue,” said Andreas Neuber, professor in the Texas Tech Edward E. Whitacre Jr. College of Engineering. “The center’s undergraduate and graduate students work on these methods that also address key needs in national security. Several of our students have received national fellowship awards, which is an excellent indicator of how our program is recognized at the highest levels.”

A secondary objective of the research is to investigate inexpensive, easily applied shielding methods for protection of assets from an enemy attack in the field or from a terrorist attack at home.

The U.S. has a critical need to develop a center for training scientists in the fields of pulsed power and energetic materials. The information gained has proven invaluable to the Department of Defense and the Department of Homeland Security.

The Center for Pulsed Power and Power Electronics has been conducting research for nearly 40 years and has millions of dollars in research funding. The center is a branch of the Whitacre College of Engineering.