In an effort to prevent future environmental and economic disasters, Texas Tech has teamed up with other universities and state officials in the Gulf Project. 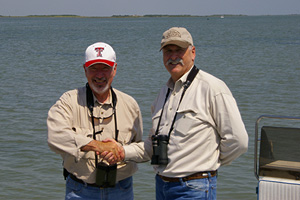 Throughout this project, researchers will continue their efforts to understand the environmental chemistry of oil and the ecotoxicological impact of the current Gulf crisis.

The Gulf Project is a coalition of energy and environmental scientists, policy experts, academic researchers, private sector research scientists and state officials. In addition to Texas Tech, the University of Texas, Texas A&M University, the University of Houston, Rice University and Southern Methodist University will participate. The Research Partnership to Secure Energy for America (RPSEA), the Texas General Land Office and the Texas Railroad Commission also are participating in the effort.

“To keep our status as the energy capital of the nation and preserve our environment, jobs and economy, Texas must become the world leader in developing the next generation in offshore oil exploration safety and response,” Gov. Perry said. “The Gulf Project is an unprecedented collaboration of the state’s top scientists, engineers and researchers, focused on protecting our residents, environment and economy, and solving the unique challenges presented by the next generation of domestic energy exploration and production.”

At Texas Tech, more than 25 scientists at The Institute of Environmental and Human Health (TIEHH) have dedicated themselves to understanding the science of the oil spill from an ecotoxicological standpoint. Researchers such as Todd Anderson, George Cobb and Ernest Smith are studying the environmental chemistry of the oil, while Ron Kendall, Jonathan Maul and Phil Smith are testing to discover the oil’s impact on Gulf Wildlife. Celine Godard-Codding is determining the oil’s impact on bottlenose dolphins as well as endangered sea turtles and sperm whales, while Seshadri Ramkumar and Steve Presley have discovered a remediation system using nonwoven cotton for absorbing the oil.

A key challenge for the industry is the current inability to test full drilling systems to determine their safety, and to develop proven methods of responding to large-scale oil spills such as the Deepwater Horizon incident. Other nations including the United Kingdom, Norway and Brazil are competing to develop a seafloor testing facility.