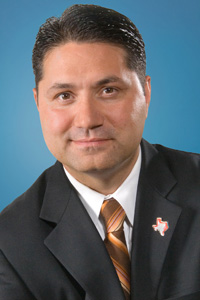 Munoz joined Texas Tech in 2004, and was appointed vice president of institutional diversity, equity and community engagement in February 2009.

Juan Sanchez Munoz has been named vice provost for undergraduate education. Munoz, who is also vice president of institutional diversity, equity and community engagement, will oversee the areas of academic advising and retention and community college and transfer relations.

“Dr. Munoz is well suited to this new position because of his academic expertise and his knowledge of the state’s Closing the Gaps initiative,” said Provost Bob Smith. “Juan’s leadership will allow us to directly address our strategic goals for strengthening undergraduate education and improving retention.”

“It is indeed an honor and a privilege to serve in this new role, and I look forward to working with new units and colleagues to further student access and success while at Texas Tech University, ” said Munoz.

Munoz joined Texas Tech in 2004. He was appointed vice president of institutional diversity, equity and community engagement in February 2009. Previously he served as special assistant to the president for institutional diversity and associate vice provost for faculty affairs. As an associate professor in the Department of Curriculum & Instruction, he also served as director of the Center for Research in Leadership and Education and Program Coordinator for Bilingual Education and Diversity Studies in the College of Education. Munoz earned a bachelor’s degree from the University of California, Santa Barbara, a master’s degree from California State University, Los Angeles and his doctoral degree from the University of California, Los Angeles.

Munoz was appointed by Gov. Rick Perry to serve on the board of directors for the Texas Department of Housing and Community. As a representative of Texas Tech, Munoz is a current and founding member of the Board of Directors, National Association of Diversity Officers in Higher Education, he serves on the Association of Public and Land Grant University’s Commission on Access, Diversity and Excellence. He is a director in the Texas Lyceum, a highly selective leadership organization that brings together diverse opinions and expertise to focus on critical state issues. His academic work on alternative education has appeared at the annual conferences of the American Educational Research Association and the American Educational Studies Association. He is the author of book chapters, academic articles and more than 30 conference papers.