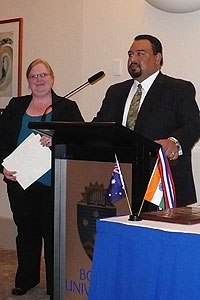 A Texas Tech School of Law student negotiation team has won the 2010 International Negotiation Competition, held on the Gold Coast in Queensland, Australia.

This is the second time that the school’s team has won the event. In 2005, the team won the title in Ireland. The competition began in 1998 and has been hosted in eight different countries.

“This is wonderful recognition of our talented negotiators and their dedicated coaches,” said Susan Saab Fortney, interim dean of the School of Law. “The international championship is yet another jewel in an exceptional year of successes in advocacy and lawyer skill competitions. Texas Tech Law School has a top-ranked program, thanks to our students, their coaches and faculty.”

The international competition, which develops negotiation skills in the context of international transactions and disputes, included 16 teams from all over the world. Each team was invited based on its performance in a national or a combined multi-nation competition. Nations represented at the competition were from North America, Europe, Asia and the South Pacific. Bazan and Martinez negotiated directly against teams from Japan, Australia and Northern Ireland.

This year’s negotiation was focused on a fictional wildlife preserve called Tamazon, based on the Gold Coast’s Currumbin Wildlife Preserve, which the participating teams had the opportunity to visit prior to the competition. Each round of competition was judged by a multi-national panel of professors, attorneys, solicitors and barristers.