Emission Choices Made Now Can Lock in Climate Changes for Centuries 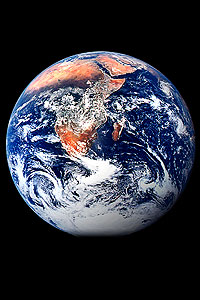 The researchers sought to quantify the relationships between atmospheric carbon dioxide and warming levels, and between warming levels and future impacts.

When it comes to our planet’s health, a group including a Texas Tech climate researcher has devised a list of advice and recommendations for possible outcomes to consider when deciding about future emissions targets.

Choices made now about carbon dioxide emissions reductions will affect climate change and its impacts over the next few decades and in coming centuries and millennia, said Katharine Hayhoe, who contributed to a new report from the National Research Council.

The report is titled Climate Stabilization Targets: Emissions, Concentrations, and Impacts Over Decades to Millennia.

“Many of us have had the experience of going to the doctor and receiving advice on how to improve our health,” Hayhoe said. “Then, it’s up to us to decide how much we are willing to change. In a similar way, this report presents the probabilities of certain impacts at different levels of global temperature increase. But we, the scientists, can’t make the decisions of how much risk is acceptable. That’s a political decision. Rather, we’re trying to give policymakers the information they need to make these decisions.”

The researchers, led by Susan Solomon of the National Oceanic and Atmospheric Administration, sought to quantify the relationships between atmospheric carbon dioxide and warming levels, and between warming levels and future impacts. The report estimates changes in precipitation, stream flow, wildfires, crop yields and sea level rise that can be expected with different degrees of warming.

In addition, warming of 1.8 F to 3.6 F could increase area burned by wildfire in parts of western North America by two to four times per degree, the report says. Warming of 5.4 F would put many millions more people at risk of coastal flooding and lead to the loss of about 155,000 square miles of wetlands and land area.

Warming of 7.2 F would lead to far warmer summers; about nine out of 10 summers would be warmer than the warmest ever experienced during the last decades of the 20th century over nearly all land areas.

This report also estimates the average temperature increases that would be likely if carbon dioxide was stabilized in the atmosphere at various target levels. Currently, the concentration of carbon dioxide in the atmosphere is about 390 parts per million – the highest level in at least 800,000 years. Depending on emissions rates, that level could double or nearly triple by the end of the century, greatly amplifying future human impacts on climate, the report says.

Stabilizing atmospheric carbon dioxide will require deep emissions cuts. Emissions reductions of at least 80 percent relative to whatever peak global emissions rate may be reached would be required to stabilize carbon dioxide concentrations for a century or so at any chosen target level.

However, the report does not recommend any particular stabilization target. Instead, it notes that choosing among different targets is a policy choice because of questions of values regarding how much risk or damage to people or to nature might be considered too much.

From Red to Blue: Professor Explores Political Shifts in Texas