The reference book, co-edited by researchers at The Institute of Environmental and Human Health, has sold an unusually high number of books for such a specialized topic. 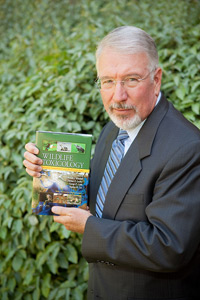 Wildlife Toxicology, Kendall's second book, provides a global assessment of a range of environmental stressors, including pesticides, environmental contaminants, other emerging chemical threats and their impact on wildlife populations.

Only a month and a half after its release, a wildlife ecotoxicology reference book co-edited by researchers at The Institute of Environmental and Human Health (TIEHH) is projected to become a national and international bestseller, according to the book’s publishers.

The book, Wildlife Toxicology: Emerging Contaminant and Biodiversity Issues, is the first reference to address environmental threats to wildlife in a single volume and recommend proven mitigation techniques to protect and sustain Earth’s wildlife populations.

“We are all very excited about the publication’s success, namely due to the team of authors and TIEHH’s credibility and reputation,” said Randy Brehm, editor of agricultural sciences for Chemical and Life Sciences Group at Taylor and Francis publishing firm. “We’ve forecasted the book to become a national and international bestseller based on our current market trends. The unfortunate timeliness due to the oil leak in the Gulf of Mexico has contributed to the visibility of the book subject matter, as well. We’re hoping the book is proving invaluable to those dealing with wildlife toxicology issues in the field right now.”

Ron Kendall, director of TIEHH, is chief editor of the book, which provides a global assessment of a range of environmental stressors, including pesticides, environmental contaminants, other emerging chemical threats and their impact on wildlife populations.

Other editors include professors George Cobb and Stephen Cox at TIEHH, and professor Tom Lacher at Texas A&M University. World-renowned conservation authority Thomas Lovejoy provides a forward to the text.

“I never expected this book to do so well,” Kendall said. “It is amazing to see this book’s success in such a very short period of time. I look at this success as a part of Texas Tech’s research journey in environmental toxicology and a fine example of our excellence in the field. The book itself has international participation from here to Africa and around the world. And right now, it can answer many questions people are asking about the current problems related to the oil spill in the Gulf of Mexico.”

Kendall, who recently received the Gerald H. Cross Alumni Leadership Award from Virginia Tech, currently serves as editor for terrestrial toxicology for the journal Environmental Toxicology & Chemistry. He has authored more than 200 refereed journal and technical articles and has published or edited several books.

Brehm said the book had 300 issues on backorder even before it published.

“The number of books sold is very impressive for a scientific reference in such a specialized subject,” she said. “This is a novel book in the area of wildlife toxicology, and it is a hot field that continues to receive media coverage. Dr. Kendall founded this area of science, so the book is written by the person who should have done it. We see this book achieving more success to come.”