The annual clash against the Longhorns will be televised nationally on ABC. 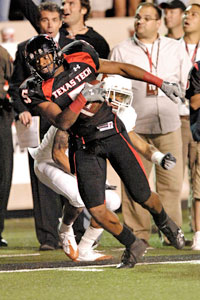 Texas Tech and Texas will kickoff at 7 p.m. on Sept. 18 inside Jones AT&T Stadium and the contest will be carried live on ABC or ESPN2.

For the third straight season, Texas Tech will open Big 12 Conference play against rival Texas, and the game will be shown in front of a national television audience in primetime as ESPN and the Big 12 announced their preseason television selections earlier today.

Texas Tech and Texas will kickoff at 7 p.m. on Sept. 18 inside Jones AT&T Stadium, and the contest will be carried live on ABC or on ESPN2, depending on the viewer's location.

The annual Red Raider-Longhorn gridiron clash returns to the Texas Tech campus and Jones AT&T Stadium, which served as the site for one of the most memorable college football games in history. Texas Tech posted its first-ever win over a No. 1 ranked team on Nov. 1, 2008, when Michael Crabtree hauled in a 28-yard touchdown reception in the final seconds to hand the Longhorns a 39-33 loss.

The game drew more than 11 million viewers across the country and ranks as one of the most watched regular-season games in ABC/ESPN history.

Texas Tech’s season opener against SMU on Sept. 5 in Lubbock will also be televised nationally by ESPN. Kickoff has been set for 2:30 p.m., and the game will mark the first for newly named head coach Tommy Tuberville. Additionally, Texas Tech’s game at New Mexico on Sept. 11 will be televised on the MountainWest Sports Network with kickoff set for 7 p.m.