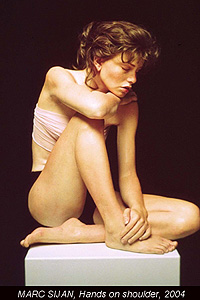 The Museum of Texas Tech University will present Marc Sijan: Ultra-Realistic Sculpture, opening June 13 and running through Aug. 8 in the museum’s Gallery 3. This is the third showing of works by Sijan at the museum.

Internationally recognized artist Marc Sijan, with his life-size realistic sculptures, has been featured in more than 40 one-man museum exhibitions, half of which set attendance records. Sijan’s exhibitions are always the talk of the town. The works have been classically described as “homages to humanity.” His startlingly lifelike representation of real people is considered the leading contemporary example of realistic sculpture. Far from static representations, the security guard, dancer and the lounging ladies feature a cross-section of American life—a frozen sense of motion, rather than an inert passivity.

Inspired by Michelangelo’s sculpture “David,” and intrigued by the instinctive and sensitive way that Old Master treated the human form, Sijan focused his attention onto the details of anatomy at a new level, creating figures that seem ready to inhale. Sijan, describing his artistic intention, says, “I want to give the sculpture life so it doesn’t come off rigid. I’m trying to create energy and motion without showing a great deal of action, a natural, very fluid look. I’m making my art believable, it goes beyond the physical to the inner spirit and soul of the person.”

Sijan’s exacting attention to detail can be seen in the pores in the skin, tiny hairs, freckles, wrinkles, and sags. Creating these ultra realistic sculptures is an intense process; each figure can take from six months to a year to complete.

The Milwaukee-based artist works in an ancient tradition, but with a very modern approach. His realistic style recalls the work of early Greek sculptors in the bold expression of human energy but does not emulate their attempts to depict an ideal human form. Sijan’s polyester resin figures are more natural, grittier illustrations of real people.

Marc Sijan received his Master of Fine Arts in 1971 from the University of Wisconsin, Milwaukee. He began creating the figures about that time. Sijan’s work bridges centuries, encompassing the universal and eternal concerns of the human form, craftsmanship, and perfectionism, as well as the contemporary themes of body language and style—those ever so subtle postures and gestures that impart unspoken messages.