With the help of international collaboration, Texas Tech uses computers to learn what happens on a basic level. 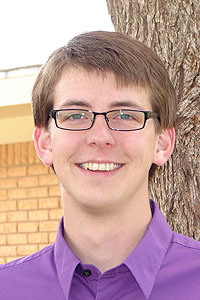 Dan Ferguson, a junior math major with a minor in chemistry, has an opportunity to work with top chemists as part of an international research collaboration.

For one Texas Tech undergraduate student, what started as the sale of a sport coat in the men’s department at Dillard’s has ended as an opportunity to work with top chemists as part of an international research collaboration.

Dan Ferguson, a junior math major with a minor in chemistry, started a conversation last year with a customer who was looking for a new jacket and also needed a student assistant. That customer just happened to be William “Bill” Hase, a pioneer of computerized chemical reaction simulations and the Robert A. Welch Professor of Chemistry.

Ferguson left for Spain May 30 to help Hase and other top chemistry researchers as they use supercomputers to discover the ways molecules interact with each other. The project is funded by a $2.5 million grant from the National Science Foundation (NSF).

“I’ve never done anything like this,” Ferguson said. “Once we get over there, we’ll be doing research. I’ll be helping do whatever any graduate student needs help with or researching anything they don’t have time to do.”

In 2007, Texas Tech received the 5-year, $2.5 million Partnership in International Research and Education (PIRE) grant from the NSF, said Hase, who is the principal investigator for the grant.

The PIRE grants enable U.S. scientists and engineers to establish collaborative relationships with international colleagues to advance new knowledge and discoveries at the frontiers of science and engineering, he said. Also, the grants promote the development of a diverse, globally-engaged U.S. scientific and engineering workforce.

Hase, the co-investigators, graduate students, post-graduate research associates and Ferguson collaborate on different projects dealing with computer-simulated chemical reactions throughout the year, then meet in the summer for about a month.

Computerized reactions are important, he said, because they help scientists understand exactly how molecules react and can lead to better-engineered drugs or open new fields of study in chemistry.

“Often, we know from experiments the products and rate of a chemical reaction, but we don’t really understand why we get the results,” Hase said. “But with the simulations, we obtain the same result and understand why.”

The title of their project is “Simulation of Electronic Non-Adiabatic Dynamics for Reactions with Organic Macromolecules, Liquids, and Surfaces,” and they collaborate with other researchers at Iowa State University, Yale University, University of Santiago de Compostela in Spain, University of Pisa in Italy and University of Vienna in Austria.

Computerized reactions are important, Hase said, because they help scientists understand exactly how molecules react and can lead to better-engineered drugs or open new fields of study in chemistry. View more simulations here>>

Texas Tech is in good company to have received a PIRE grant, he said. Of the 479 preliminary proposals, only 69 were chosen to write full proposals. Only 20 received the grants, and include universities such as University of Pennsylvania, Cornell University and University of Missouri.

“That they only chose 3 percent of those who applied, Texas Tech should be proud to have received this grant,” Hase said. “The NSF has high expectations of us. The two main goals of the grant are to form strong international collaborations between scientists in America and Europe, and to do better science we couldn’t do by ourselves.”

Some of his simulations may run for weeks or even months on 32 or more processors, Smith said. Usually, it is necessary to run hundreds of these simulations to obtain chemically meaningful results.

“These computations lead to insights on how atoms react to form molecules and how catalysts work,” Smith said. “It is our job at the High Performance Computing Center to help configure the hardware and software to support such activities. We also ‘tune’ the codes that Bill uses so they run two to 10 times faster than they would ‘out of the box.’ ”

Ferguson said this experience may help him decide what he wants to do after graduation.

“It’s my first internship,” he said. “I’ve never done anything like this. I don’t know exactly what I want to do. So, this is opening doors and seeing what’s inside. I really have been very lucky working with Dr. Hase in this international partnership. I like what this program offers. What I’m doing for Dr. Hase is very interesting and it’s definitely smack dab in the middle of my major and minor.

“I’ve definitely been able to put to use what I’ve learned. Hopefully I’ll be able to learn more about what I want to do.”