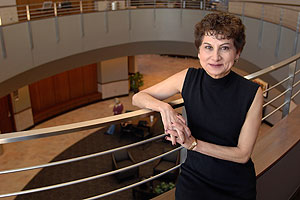 Susan Saab Fortney, pictured in the Law School’s Lanier Center for Professional Development, will take the reins of the school until a permanent dean is named.

Officials announced that Susan Saab Fortney, associate dean for research and faculty development, will become the interim dean of the School of Law effective July 1. Fortney also is a Horn Professor of Law and director of the school’s Health Care and Bioethics Mediation Clinic.

“Susan is the ideal person to assume the interim deanship in the School of Law,” Smith said. “She is an outstanding administrator-teacher-scholar who has the utmost respect of the law faculty, students and staff.”

Walter Huffman, dean of the law school, announced in June 2008 that he would be stepping down but would remain on the school’s full-time faculty teaching national security law and related topics.

“I am deeply honored to serve.” Fortney said. “Dean Walter Huffman has inspired us all and I look forward to taking the baton.”

Prior to joining the law school faculty, Fortney practiced law in both the public and private sectors. She first served as briefing attorney for Chief Justice Carlos Cadena of the Fourth Court of Appeals of Texas. She continued her public service as an attorney with the Division of Corporation Finance and the Division of Enforcement at the U.S. Securities and Exchange Commission. Fortney later entered private practice, handling securities and corporate matters. She developed an expertise in business and coverage litigation, principally handling legal malpractice and directors and officers liability cases.

In 2005, Fortney received the Texas Tech President’s Academic Achievement Award for excellence in teaching, service and research. In 2006, she received the Chancellor’s Distinguished Teachers Award, the highest teaching award in the university. In 2007, she was given the law school’s Distinguished Researcher Award and was elected as a member of the American Law Institute.

She also is an elected member of the American Bar Foundation and Texas Bar Foundation. In 2008, she was identified by Texas Lawyer as one of the 30 extraordinary women in Texas law. In 2009 she was selected to serve as the law school’s first associate dean for research and faculty development and as an adjunct professor in the Texas Tech Health Sciences Center Department of Psychiatry. The Texas Bar Foundation recently selected her as the 2010 recipient of the Lola Wright Ethics Award in recognition of outstanding public service in advancing and enhancing legal ethics in Texas.