It has been a popular sport in European countries for centuries and one university club has made it its mission to bring cricket to the local community. 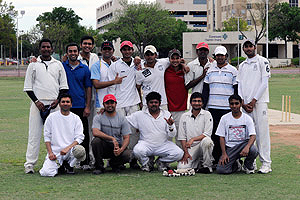 As local interest continues to grow, club members hope to establish a West Texas cricket league in the future.

There’s the same crack of a bat, the whiff of leather, the shouts from fans. Yet the game a group of Texas Tech students play on spring Sundays is unfamiliar to most Americans raised on baseball cards and Babe Ruth’s legacy. It’s a European import known as cricket.

Since it was started by sport enthusiasts in 2003, the Raider Cricket Club (RCC) has brought an English staple to West Texas with the purpose of informing the community “cricket lives in Lubbock, too.”

“I started playing cricket when I was 3 or 4 years old in India,” said club member Ankit Sikka. “It’s not as popular in the U.S. but when I found out about the club from friends after starting at Texas Tech, I joined. It’s a chance for students to get together and meet new people.”

By gaining popularity, the RCC became an organized club in the 2003-2004 academic year. Consisting of a majority of Texas Tech graduate students, the club has been growing ever since and welcomes all community members, young and old, amateurs and experts, to join.

“There are about 2,000 people, including Texas Tech and the surrounding community, who might be interested in cricket,” said Dakshina DeSilva, advisor for the RCC. “Out of that we have about 40 students that are very passionate about playing, which gives us the ability to sustain the club.”

Nicknamed “the gentleman’s game,” cricket has a history rich with success. Since it was first documented being played in England in the 16th century, it has grown to become the second most popular sport in the world behind association football, or soccer as it is referred to in the United States. Today, the international governing body International Cricket Council (ICC) has 104 member nations around the world. Cricket, which is played with two teams of 11 people, is an emerging sport in the U.S. and in West Texas.

The old polo field at Texas Tech is home to RCC practices and matches, or just to enjoy the game they all love. Like other clubs, the RCC receives funding from Rec Sports. The club uses membership fees and any additional money gathered from fundraising efforts to travel to matches and tournaments in surrounding areas like Midland, Amarillo and Hobbs, New Mexico.

As students, faculty and staff continue to join, the future looks bright for the RCC. In the coming years participants hope to continue increasing interest and membership, create new playing grounds and have the opportunity to organize a West Texas cricket league.

“We are in the center of this playing area,” DeSilva said. “We have a chance to expand the game of cricket around West Texas.”

The Department of Recreational Sports promotes each student's learning experience by having quality facilities, programs and activities that engage the university community in healthy lifestyles incorporating sport, fitness and leisure.